Today we're excited to chat with Catherine Fisher author of

Read on for more about Catherine and her book, plus a giveaway! 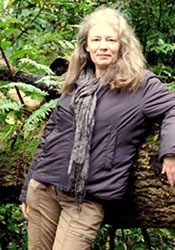 Catherine Fisher is the New York Times best-selling author of Sapphique and Incarceron. An acclaimed novelist and poet, she has written many fantasy books for young people, including the Oracle Prophecies series. In 2011 she was appointed the inaugural Young Person’s Laureate for Wales. Catherine Fisher lives in Wales. 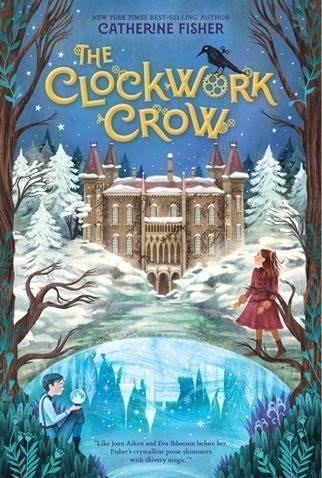 Orphan Seren Rhys is on her way to a new life at the remote country mansion of Plas-y Fran when she is given a package by a stranger late at night in an empty train station. The package contains a crotchety, mechanical talking crow, which Seren reluctantly brings to her new home. But when she gets there, the happy Christmas she had hoped for turns out to be an illusion—the young son of the house, Tomos, has been missing for almost a year, rumored to have been taken by the fairies. With the Crow’s reluctant help and a little winter magic, Seren sets off on a perilous journey to bring Tomos home. An enthralling story of family and belonging set in frost-bound Victorian Wales.

Inspiration to write the book?

I wanted to write a Christmas story. I haven't done that for a while, and wanted a really wintery, snowy world, with Christmas at the end. I also wanted to write a Victorian story about a little girl in a big old house. Once I started I discovered the Crow and then the Tylwth Teg came in as well. All the things I like best. These were the starting points for The Clockwork Crow.

Obviously I like all the characters and my favorite is the Crow. He was such fun to write. He is vain and tetchy and tells immense lies, and yet underneath he is trapped in a spell that he can't get out of. His relationship with Seren develops through the book, and that was a great delight to create too.

The title and the novel sort of came together. Once I had decided on the setting of the story, the title jumped into my mind. I don't know where it came from, but it meant that the Crow had to be in the story. It's quite difficult to separate when different elements of the story arrive.

The most important thing I have learned as a writer is to write your own story the way you want it. No one else can write your story. It is unique to you.

Walker has produced a very attractive cover for the book. I like the little details, like the fox and birds on the back, and also the shininess of the snow globe. It all looks very Christmassy, as it should.

Up next- well there are two  sequels to the Clockwork Crow. These are the Velvet Fox and The Midnight Swan. The Swan is being published in the UK next month, so they are both already written. I'm now working on a collection of short stories, some old, some new, all strange and magical, which I have gathered together. I hope it will be called The Red Gloves and Other Stories.

A small theatre company here in Wales is hoping to do a production of The Clockwork Crow for its Christmas show, which will be exciting. I'm hoping one day there might be a TV adaption or a film. You never know.

None of the characters were troublesome to write. in fact they all seemed to write themselves. Seren had a definite personality right from the start; in the scene at the railway station I already knew just what she was like. The Crow too was fun to write. He added a lot of humor to the story, though he would be probably most annoyed to hear that.

I prefer revising to the initial writing. Working out the plot and the events of the story is always the difficult part. It's nice then to revise and sharpen up the language; this is the fun bit! You can also cut bits out at this stage and correct mistakes and make everything shiny.

My superpower is the ability to dream. I can do it anywhere, any time. I am a dreamer of real skill.

Thecause I am most closely concerned with is keeping our planet green and healthy, with plenty of biodiversity. And in particular, here in Wales, the bit of the planet I live on. We are lucky in that we have superb hills and coastline, but there is still a lot to do, to keep things safe