Today we're excited to chat with Cambria Gordon author of

This Poetry of Secrets.

Read on for more about Cambria and her book, plus a giveaway!

Cambria Gordon is the coauthor of the award-winning The Down-to-Earth Guide to Global Warming, winner of the National Green Earth Book Award. She has written for Los Angeles Times Magazine, Boys' Life, Parent Guide News, and The Jewish Journal of Los Angeles. She lives in LA with her husband and youngest son, and as close as possible to her two adult children, without annoying them.

Meet The Poetry Of Secrets! 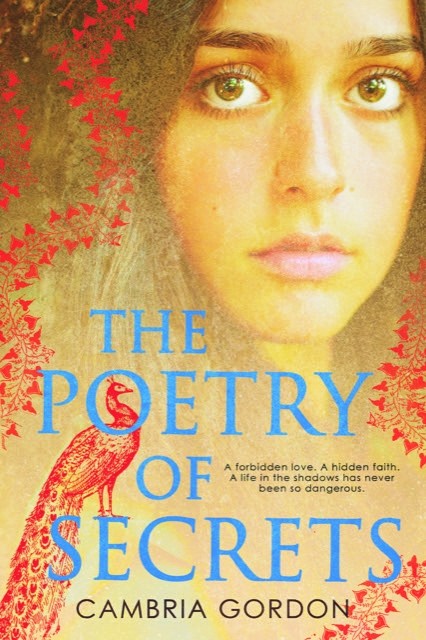 Perfect for fans of Ruta Sepetys and Elizabeth Wein, this lyrical portrait of hidden identities and forbidden love is set against the harrowing backdrop of the Spanish Inquisition.

Isabel Perez carries secrets with her every day.

As a young woman in 1481, Trujillo, Spain, Isabel should be overjoyed that the alguacil of the city wants to marry her. She is supposed to be flattered especially because she and her family are conversos, Jews forced to convert to Catholicism -- leaving them low in the hierarchy of the new Spanish order. But, although she can't tell anyone, she only has eyes for Diego Altamirano, a young nobleman whose family would never let him court Isabel.

So for now she sneaks out to attend poetry readings, for she longs to one day be a famous poet...another secret wish that may never come true.

But Isabel's most dangerous secret is this: Though the Perezes claim to be New Christians, they still practice Judaism in the refuge of their own home. When the Spanish Inquisition reaches Trujillo determined to punish such judaizers, Isabel finds herself in more danger than she ever could have imagined. Amidst the bloodshed and intolerance, she and Diego will have to fight for their lives in a quest to truly be free.

In 2016, I moved to Madrid with my family for a year. We traveled throughout Spain on weekends and on school breaks. I saw many churches, a few less mosques, but hardly any synagogues. Yet, in certain cities, there were always "Jewish quarters", streets demarcated by a symbol that meant Jews once lived there. I began to wonder, what happened to all the Jews of Spain? Why were these neighborhoods devoid of any remnants other than the occasional Hebrew letter etched into a brick in a modern building? I hadn't studied the Inquisition when I was in school in Los Angeles so I didn't know the history. I read all I could, both fiction and non-fiction about this time period. And like I always do whenever I think of the past, I imagined myself living there. I asked myself what would I have done if I were a Jewish teenage girl in medieval Spain and fell in love with the wrong boy. Would my religion matter to me? Would I defy my family? What would it feel like to be a minority in a country ruled by Church and Crown? The story unfolded from there.

That's like Sophie's Choice! It's impossible to choose your favorite child. But I have to say that I really enjoyed writing Beatriz's character. She is the sister of the protagonist, Isabel. I think a holier-than-thou person in any religion is fascinating. Her judgement about Isabel was easy to access for me because I can be a bit judge-y of others. It is something I continue to work on in my own life. Yet, for people like Beatriz, there is always a wound down deep, a reason they are the way they are. So it's a psychological excavation and when there's redemption and real change at the end of a character arc, it's oh so satisfying.

The novel, definitely. I called it Trujillo (the name of the town it takes place) in my files for the 2 years I spent writing it. When it was time to choose a title, my editor Lisa Sandell and I must have gone through 50 possibilities. My editor and I got attached to one title in particular: Tainted, till the team felt it wasn’t quite right. Scholastic wanted something more lush and lyrical and I agree. I see now that the title really creates an expectation for what's inside and The Poetry of Secrets delivers on that.

The want and need of each character. If you don't know what your character wants (ostensibly) and needs (below the surface) then you simply can't begin to put words on paper. I just went through that with a new novel I'm working on. I was too mushy with my character's wants that my critique group kept asking me the same question. What's her wound? Even in a light rom-com, your protagonist must have a wound, a ghost, a thing that sits inside him/her, motivating them throughout the story. I ended up throwing out everything about this character's backstory and re-thinking it. From there, the sentences began to flow.

That girl! I freaked out when I first saw her because she looks like a way prettier version of me when I was young. My son just said to me recently when he saw the advanced reader copy, "Mom, she looks like you! It's crazy!" Baily Crawford, whom I've never met in person, designed the jacket and found the picture on a stock photo site. I am going to post a teenage picture of me on my author website and you can compare and judge for yourself.

My friend Allison Winn Scotch's book, Cleo McDougal Regrets Nothing. Also, my husband and I want to listen to Maggie Gyllenhaal read War and Peace. It's a commitment.

My writing teacher, Barbara Bottner's YA novel in verse. I am Here Now. It's a beautifully written, honest and humorous portrayal of a girl in the 1960's and how she uses art to survive her toxic mother, absent father, and sexual awakenings.

Also, I adored The Book of Longings, by Sue Monk Kidd. It's a well-researched imagined story of the Jewish wife of Jesus of Nazareth before he died. I found a lot of similar themes to my book. Female empowerment and religious oppression, fear of a different way of thinking.

I am currently working on a YA that alternates between present day and 19th century Berlin. It is about two female musicians who live in two very different worlds, and how the experience of one influences the choices of the other.

YABC:  Are there any film adaptations, TV shows, audiobooks, or other adaptations in the works for this book?

Nothing yet for TV and film. But the audiobook will definitely be coming from Scholastic.

The knife fight between Diego and a group of armed city officers was quite challenging. I had to choreograph it, imagining where each of them would stand and what it would look like to brandish knives and charge and miss and ultimately strike flesh. Also, I had to describe a carriage from that time period with Isabel clinging onto the outside and trying to take the reins. At the risk of sounding totally anti-feminist here, I think male writers inherently know what to depict in physical action scenes. For me, the whole thing was completely foreign. But guess what? Now I can write a kick-ass fight scene! The most emotional part of the book was writing the torture scene at the hands of the Inquisitors. But I don't want to be a spoiler, so you'll have to read the book to find out more.

Yuçe, a Jewish family friend of Isabel's was tricky for me. In my first draft, he was older and in love with Isabel. But because there was already a love triangle between Don Sancho, Isabel and Diego, this was too confusing. The role of the practicing Jews in Spanish society was important. As a converso, Isabel compares herself to them, wondering what might have been. So figuring out who Yuçe is to Isabel and planting the seeds for him to come back at the end for a crucial plot point took a bit of doing.

Revising for sure. Drafting is painful. For me, the ligaments, the connective tissue of the story, is the most boring to write. I like beginnings and endings. I get impatient during the long, arduous middle. But that is, unfortunately, what writing is. A long, arduous process.

Following a recipe. During Covid-19 sheltering in place, I've become an expert at following recipes. My family thinks I'm a good cook, but actually it's just reading. Also, I'm a really good trash-picker-upper. I cannot go to the beach without a bag to collect trash. Balloons, straws, plastic detritus, bottle caps. Once I found a porcelain ballerina inside a shoe. It's definitely a civilian super-power.

The NRDC, Natural Resources Defense Council. I've been working with them for 15 years. Made up of the smartest attorneys, policy experts and scientists I've ever met, they defend our planet against polluters, science deniers, and fossil-fuel lobbyists. They are on the front lines of climate change activism every day.

The Poetry of Secrets