Today we're excited to chat with Beth McMullen author of

Read on for more about Beth and her book! 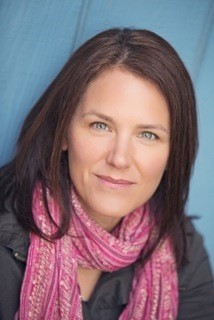 Beth McMullen is the author of the Mrs. Smith’s Spy School for Girls series; the Lola Benko, Treasure Hunter series; and several adult mysteries. Her books have heroes and bad guys, action and messy situations. An avid reader, she once missed her subway stop and rode the train all the way to Brooklyn because the book she was reading was that good. She lives in Northern California with her family, two cats and a parakeet named Zeus, who is sick of the cats eyeballing him like he’s dinner. Visit her at BethMcMullenBooks.com. 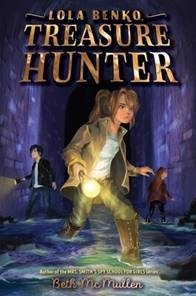 Stuart Gibbs meets The Lost Property Office in this action-packed mystery about a young girl searching for her father from the author of Mrs. Smith’s Spy School for Girls—the first in a new series!

Having a world-traversing archaeologist dad means twelve-year-old Lola Benko is used to moving around not putting down roots anywhere. But every day and every hunt for something hidden is an adventure, and no matter what, she and her dad are an unbeatable team.

Then her father disappears. The official story is that he was caught in a flash flood, but Lola’s research shows the day in question was perfectly pleasant. And it will take more than empty reassurances from suspect strangers for Lola to give up on her dad. She has a feeling his disappearance has to do with a mythical stone he was studying—a stone so powerful, it could control the world. But in the wrong hands, it could end it, too...

With the help of some new friends at her school, it’s up to Lola to go on the most important search of her life.

I wanted to write a fun follow up to the Mrs. Smith’s Spy School for Girls series, something with just a touch of magic but not full on fantasy. I’d also been thinking a lot about that scene in Raiders of the Lost Ark when Indy travels to Nepal to ask Marion about a special medallion he thinks she has. During their conversation, Marion references a life growing up following her archeologist father all over the place looking for ‘his bits of junk.’ I started to think about what that would have been like for her. Lola Benko, Treasure Hunter is my updated, modern take on that idea.

Definitely the novel! I’m notoriously terrible at titles! Lola Benko, Treasure Hunter is my seventh published novel and it had about five different titles before we settled on this one. I do occasionally come up with titles I think are cool but usually they don’t match what I’m working on. For instance, I think the title Galaxy Girl is so great but I don’t have a book to match it. J

Coffee!  I know, cliché and boring. But also, those red gummy cinnamon bears. LOVE THOSE!

This is a great question! I’ve learned to set micro-goals, small achievable goals that aren’t overwhelming. Sometimes when I think about a novel as a whole (all those words! So many pages!), I freak out. But if I think about it in small chunks of a thousand words, well, that’s not so bad. I tend to set minimum word count goals for myself that aren’t intimidating so I have a good chance of meeting them. Often times, I blow right past the goal and that’s great but even if I don’t, I’ve at least gotten to where I intended that day and I can see progress happening. I used this method a lot during the first months of the shut down when I found concentrating very difficult in light of all the bad things that were happening in the world. Setting small goals, I was able to keep working even if my pace was slower than normal.

I love the cover! Aladdin/S&S really goes the extra mile to get it right. We had a cover that just wasn’t working so they scratched it and started over. The cover now is stunning - the colors and motion and tension are just a perfect match for the story inside.

It’s like Everest and I’m sure one day it’s going to topple over and smother me. Right now, I’m reading A Burning, by Megha Majumdar; next up is I’m Not Dying With You Tonight, by Kimberly Jones & Gilly Segal. The rest of the pile: I’m Not Your Perfect Mexican Daughter, by Erika Sanchez, Hey Kiddo, by Jarrett Krosoczka, Conviction, by Denise Mina, and The Mirror and the Light (Wolf Hall #3), by Hiliary Mantel.

Aristotle and Dante Discover the Secrets of the Universe, by Benjamin Alire Saenz. Ahhhh!! I loved this book!  The characters just worm their way into your heart and stay there forever. Should be required reading for everyone.

I just finished the sequel to Lola Benko, Treasure Hunter which comes out next summer. Next up is the first in a new series that debuts in March 2022. I’m diving a bit more into fantasy with this one which is super fun. It’s tentatively called Cats & Dragons and is about a girl who finds a stray kitten who turns out to be…unusual.  It’s been so much fun to think about and work on.

The audio books for the first two Mrs. Smith’s Spy School for Girls are out now and the third one is in the works. There is also potential for a Mrs. Smith’s television show but that has been slowed down by the pandemic. Not much happening in Hollywood at the moment.

Drafting, absolutely. Everything is new and fresh and the possibilities are endless. Revising feels like homework! I’ve already made all these connections and unraveling them is complicated. But as I work through the revision process, eventually I feel like I have the whole novel in my head and that makes it much easier. I can see how everything must fit together to make sense. But it still feels like work!

Great, you have given interesting information and experiences, I really like it.
return man 3

0
Great, you have given interesting information and experiences, I really like it. [url=http://returnman3game.net/]return man 3[/url]
Cancel Update Comment
How to resolve AdBlock issue?
X