author of Dawn Of Spies!

Below you'll find more about Andrew, his book and a giveaway!

I did a lot of research years ago for a book I was going to write about William Shakespeare and Sir Walter Raleigh. That novel never got written, but I kept wanting to do something set around that period of history. CRUSOE is set about 70 years later, but the world didn’t change very fast in those days, so a lot of the research still stands, and I’ve managed to link back to some of the themes I wanted to address. In a strange way this series is the sequel to a book I haven’t written yet…

I’m a big fan of Isaac Newton. He takes on the Q role in the newly formed British Secret Service – the scientific support – and he’s scatty and absent-minded. I imagine him as being played by a younger Christopher Lloyd in the movie version. Maybe a CGI Christopher Lloyd.

The series title – CRUSOE – and the book title – Dawn of Spies – came first. For a while I had a different title – The Darkness of the Stars – but I eventually came back to Dawn of Spies. The themes and scenes in the novel all derived from that.

Without wanting to give too much away, there’s a bit in a flashback where Robinson Crusoe has gashed his leg, and his friend Friday uses soldier ants to seal the wound – she gets them to bite the wound closed and them twists off their heads. That scene really freaked my editor out, and I’m quite proud of it. It’s not meant to be particularly horrible though – it’s meant to show how difficult survival can be on a desert island.

I think when I started I’d spend a lot of time just waiting until I was in the mood to write, or until the elusive ‘muse’ had struck. Nowadays I’ve realised that the best thing to do is just sit down and write, regardless of whether what you’re writing is good or just mediocre – it’s easier to go back and improve what you’ve done later than it is to write it all from scratch in a hurry.

Laz Marquez, who did the illustration, has turned in a brilliant cover that projects a whole espionage / secret agent vibe in a really classy and impressionistic way. I’ve been a fan of his revisionings of classic movie posters for a while now, and I’m honoured that he found the time to work on this series.

There’s no one particular book I’ll be looking out for, but I’ll buy anything by Stephen Gallagher, Tim Powers, John R. Maxim, David Morrell, Dan Simmons or F.Paul Wilson that comes out. And I’m pretty sure there’ll be a new Stephen King novel that I’ll have to buy.

I’m a big fan of Tim Powers, and he published a book called MEDUSA’S WEB which I loved. His historical fantasy novel HIDE ME AMONG THE GRAVES was also a brilliant read. It didn’t come out in 2016, but that’s when I read it. It’s a kind-of sequel to a stunning book he wrote back in the 1980s called THE STRESS OF HER REGARD, which was all about Byron, Shelley and stone vampires, but the new one can be read on its own. He’s the writer I want to grow up to be.

I’m just working on the 3rd CRUSOE book now, having recently delivered two other books (the first in a new YA series about a teenager getting mixed up in espionage and the first in an adult science fiction series). And after CRUSOE #3 I’m hoping to get a new TV series off the ground. It’s going to be a busy year.

Only that writing is not only what I do, it’s what I love, and I consider myself fortunate that I can make a living doing it.

I think it was the first flashback scene when Robinson Crusoe is washed up on the desert island. I had to show that he was traumatised, and grieving for his father, without making it too intense emotionally. (I almost wrote ‘without going overboard’ just then, which would have been the wrong phrase entirely).

I find villains difficult. I know the advice is that a villain is the hero of their own story, and you should write them that way, but my first draft always has them being really sneery and supercilious, like a bad James Bond villain.

I hate revising, because it means going back and rereading – usually multiple times – something I’m already far too familiar with. It also means confronting, face to face, the things I’ve done badly or done wrong, which makes me feel really bad. Drafting is far more enjoyable, because when you get in the groove you can just go on for hours without realising that time has passed. Drafting, at its best, is like improvising a guitar solo at a rock concert – that’s what I tell myself, anyway.

I care, and I want people around me to be happy and safe. That’s why my wife and I have ended up with one child of our own and five others that stay with us on a permanent, semi-permanent or occasional basis because they’ve come from broken, violent or unstable homes and want some stability and some love. So, if I had a superhero name it would probably be Sympathy Man, or Captain Caring, neither of which are anywhere near as cool as Captain America or will lead to a multi-million dollar film franchise.

I was diagnosed with clinical depression 16 years ago. More recently that’s been upgraded, if ‘upgraded’ is the word, to Bipolar Disorder Type II. Basically I swing between extremes of mood – sometimes catastrophically low (although medication helps with that) and sometimes recklessly high (which probably explains why I’ve bought so many bass guitars). Mental illness is still very much something that people are often ashamed of if they have it, or don’t like to talk about or think about if they see it in their friends or family. Young people especially have these problems but often don’t seek help because they think it’s just part of life or of growing up. I’m keen to try and bring this out in the open, because although mental illness and its treatment can be complicated it’s important that people realise that it’s often due to brain chemistry going wrong, and that’s a treatable illness just like, say, diabetes. 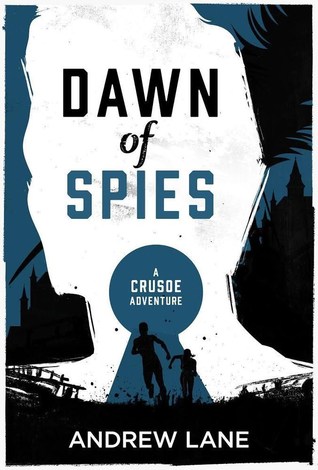 Rescued from a deserted Caribbean island, 17-year-old Robinson Crusoe and his female friend, Friday, find themselves in late 1600s London, a bustling city that proves as treacherous for them to navigate as the remote island they just left behind. Thanks to their honed survival skills, Crusoe and Friday are recruited by a young writer named Daniel Defoe to work as agents for Segment W, a covert spy group that reports directly to the Crown.

Crusoe, Friday, and Defoe must rescue the Countess of Lichfield from a kidnapping plot. They are shocked to discover that a mystical and mysterious organization known as the Circle of Thirteen is behind the kidnapping.

With an illustrious cast of historical characters including King Charles II and Sir Isaac Newton, Crusoe thrusts the reader and its young heroes into a world of espionage, intrigue, and peril at the dawn of the spy age.

I love the cover and I do like mystery stories very interesting. Late 1600s London I am there, love stories based in different time periods.

0
I love the cover and I do like mystery stories very interesting. Late 1600s London I am there, love stories based in different time periods.
Cancel Update Comment

Dawn of Spies sounds like an exciting read! I love the cover. Thank you

0
Dawn of Spies sounds like an exciting read! I love the cover. Thank you
Cancel Update Comment

I'm very intrigued by the cover, and the synopsis just adds more flame to the fire!

0
I'm very intrigued by the cover, and the synopsis just adds more flame to the fire!
Cancel Update Comment

I love the cover. I even more LOVE that we get Robinson Crusoe and Sir Isaac Newton! That is way cool and fun! I can't wait to read this!

0
I love the cover. I even more LOVE that we get Robinson Crusoe and Sir Isaac Newton! That is way cool and fun! I can't wait to read this!
Cancel Update Comment

I like the cover. Very intriguing. The story sounds exciting!

I love the cover and the synopsis promises so much action, mystery and excitement to read!

0
I love the cover and the synopsis promises so much action, mystery and excitement to read!
Cancel Update Comment

The cover and synopsis both convey a lot of excitement and action.

0
The cover and synopsis both convey a lot of excitement and action.
Cancel Update Comment

The cover looks good. The synopsis makes me think that this will be a good mystery with good historical references.