Author Chat with Adrianne Finlay (Cut Off) Plus Giveaway! ~ (US Only) Today we're excited to chat with Adrianne Finlay author of

Read on for more about Adrianne and her book, plus a giveaway!

Adrianne Finlay received her PhD in literature and creative writing from Binghamton University. Originally from Ithaca, New York, she now lives in Cedar Falls, Iowa with her husband, the poet J. D. Schraffenberger, and their two young daughters. She is an associate professor of English and the Program Director of Creative Writing at Upper Iowa University in Fayette, Iowa. 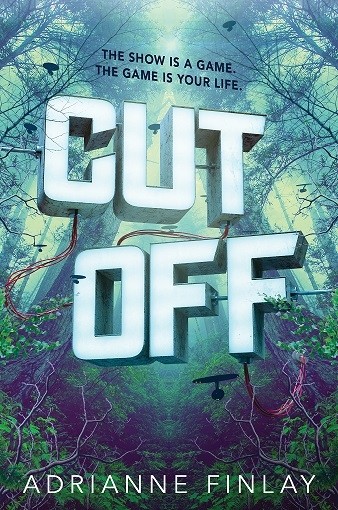 A neglected girl’s chaotic coming-of-age becomes a trending new hashtag in a novel about growing up and getting away by an award-winning author.

Underprivileged and keenly self-aware, SoCal fourteen-year-old Layla Bailey isn’t used to being noticed. Except by mean girls who tweet about her ragged appearance. All she wants to do is indulge in her love of science, protect her vulnerable younger brother, and steer clear of her unstable mother.

Then a school competition calls for a biome. Layla chooses her own home, a hostile ecosystem of indoor fungi and secret shame. With a borrowed video camera, she captures it all. The mushrooms growing in her brother’s dresser. The black mold blooming up the apartment walls. The unmentionable things living in the dead fridge. All the inevitable exotic toxins that are Layla’s life. Then the video goes viral.

When Child Protective Services comes to call, Layla loses her family and her home. Defiant, she must face her bullies and friends alike, on her own. Unafraid at last of being seen, Layla accepts the mortifying reality of visibility. Now she has to figure out how to stay whole and stand behind the truth she has shown the world.

There’s a reality show on the History Channel called Alone. In it, contestants are dropped in the secluded wilderness to survive on their own. To win the show, you have to stay by yourself in the wilderness longer than anyone else, without tapping out by calling the producers for rescue. When the contestants do call the producers, it’s usually at a point when they’re desperate—they’re injured, sick, or emotionally drained. While watching Alone, I thought, “Imagine if, when you finally called to be taken off the show, no one answered, and no one came to rescue you.” The idea was chilling. You’d have no way of knowing what was going on, and there would be nothing you could do about it. That’s how I started building the premise of CUT OFF.

This might be the first time I’ve written a project where the title never changed, and I knew what it was from the beginning. The title has some mystery and is intriguing, while also being descriptive—these characters are truly cut off, isolated from the rest of the world.

I don’t usually eat while writing. It’s too distracting, maybe. I drink hot tea. In the past I’ve gone to a coffee shop to write, but nowadays, with Covid, I can’t really do that, so now I guess I have to make my own tea.

The most important thing I’ve learned is to keep going. First drafts are for discovery, so just get the story down on the page. Don’t expect it to be perfect or brilliant—that comes later. Just keep writing, and have faith that you’ll make it beautiful in revisions.

I love the jacket illustration and design (Joel Tippie and Mary Claire Cruz)! The incongruous technology of these letters floating in the wild, with red wires snaking out of them, is creepy, and the image of the wilderness mirroring itself makes the scene of trees and branches feel strange and unsettling.

I’ve been reading a few different things. I’m enjoying Saga, a science fiction comic book series by Brian K. Vaughan and Fiona Staples. I’m also reading Educated, a memoir by Tara Westover. I’ve been diving back into Stephen King as well. I find horror especially distracting during the pandemic, and I had never read Salem’s Lot before, so I’m giving that a go.

Drafting is fun. When it’s going well, it can feel like reading a book you’re really enjoying. But I also like the later rounds of revision, when it feels like the hard work of creating is done and now is the chance to refine language and make scenes as strong as they can be.

Yes! I make soap, lotion, and lip balm with my friend Rachel. We sell it locally, and all the proceeds go to type 1 diabetes research, a cause important to both of us since Rachel’s son Henry was diagnosed at three years old six years ago.

Look forward to reading this!

I really like the cover! I can't wait to read this.

I love books about things like game shows! You know the stakes and competitors right away. Looks like a super fun read!!

The purple on the cover is so pretty. The synopsis sounds so interesting, I've been waiting for this book to come out!

0
The purple on the cover is so pretty. The synopsis sounds so interesting, I've been waiting for this book to come out!
Cancel Update Comment

I love the cover. As a fan of reality TV, this book is a must read for me.

0
I love the cover. As a fan of reality TV, this book is a must read for me.
Cancel Update Comment

The cover somehow reminds me of Maze Runner. Sounds like a great read!

Predicting this one will be a real tear jerker.

0
Predicting this one will be a real tear jerker.
Cancel Update Comment
How to resolve AdBlock issue?
X