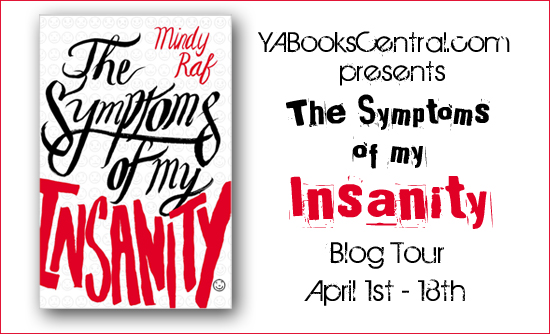 Hey guys! Welcome to the Blog Tour Kickoff for THE SYMPTOMS OF MY INSANITY by Minday Raf! Each week you’ll find author exclusives on various book blogs across the ‘net, but today, we’ve got a special video from Mindy and a giveaway below! Enjoy.

I almost raised my hand, but what would I say? “Mr. Bayer, may I please be excused? I’m not totally positive, but I think I might have cancer.” No way. Then everyone at school would know, and they would treat me differently, and I would be known as “Izzy, that poor girl who diagnosed herself with breast cancer during biology.”

But Izzy’s sense of humor can only get her so far when suddenly her best friend appears to have undergone a personality transplant, her mother’s health takes a turn for the worse, and her beautiful maybe-boyfriend is going all hot and cold. Izzy thinks she’s preparing for the worst-case scenario, but when the worst-case scenario actually hits, it’s a different story altogether–and there’s no tidy list of symptoms to help her through the insanity.

Debut author Mindy Raf is a writer, comedienne, and musician who has written for VH1’s Best Night Ever,WABC Radio, and CollegeHumor.com. She lives in Brooklyn, New York. Learn more about Mindy at www.mindyraf.com or follow her on Twitter @mindyraf!

Mindy shares her writing process with us:

Thanks so much, Mindy, for that hilarious video! We can’t wait to get our hands on this book.

In the meantime, five lucky US winners will receive a signed copy. Enter by filling out the form below. Good luck!

Tags: Blog Tour, Mindy Raf, The Symptoms of My Insanity

20 thoughts on “Blog Tour Kickoff: The Symptoms of My Insanity by Mindy Raf”

You are here: Blog Tour Kickoff: The Symptoms of My Insanity by Mindy Raf