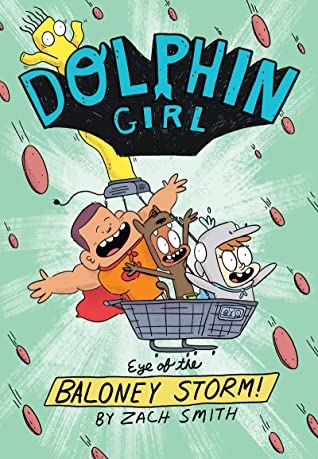 Today we are chatting with Zach Smith, author of

Read on for more about Zach, his book and giveaway!

Zach Smith is a cartoonist, author, illustrator, and show creator. Currently, he is creating an upcoming show for Nick Jr. and works as a storyboard artist in the animation industry. Zach lives in the suburbs of Los Angeles with his wife, two daughters, and two dogs. Before becoming a professional artist, he delivered pizza for a living. Dolphin Girl is his first graphic novel series.

Attention fans of Lunch Lady and Steven Universe! Middle grade graphic novel superhero-in-training Dolphin Girl is back fending off cold cut storms and learning to deal with a new (super-annoying) rival in the second book in this side-splitting series.
Ever since the evil Sea Cow tried to steal Dolphin Girl and Captain Dugong’s restaurant/hideout in Trouble in Pizza Paradise!, business has been bad. Dolphin Girl attempts to rebrand the restaurant, but everyone who works there hates the new outfits and the new music. Even worse, there’s a new superhero in town—everyone loves, Wonder Friend and they seemingly can do no wrong. On the other hand, Dolphin Girl is getting everything wrong.
But when Sea Cow returns to cover Midwestern Deerburbia in a blizzard of baloney, Dolphin Girl and Otter Boy have no choice but to team up with the all-too-wonderful Wonder Friend to prevent their town from becoming a big Jimmy John’s sandwich!
With bold, bright, energetic illustration Into the Baloney Storm serves up a graphic novel that fans of Steven Universe will be eager to sink their teeth into.

One winner will receive a copy of Dolphin Girl 2: Eye of the Baloney Storm (Zack Smith) ~ (US Only)

1 thought on “Author Chat with Zack Smith (Dolpin Girl 2: Eye of the Baloney Storm), Plus Giveaway! ~ (US Only)”

You are here: Author Chat with Zack Smith (Dolpin Girl 2: Eye of the Baloney Storm), Plus Giveaway! ~ (US Only)