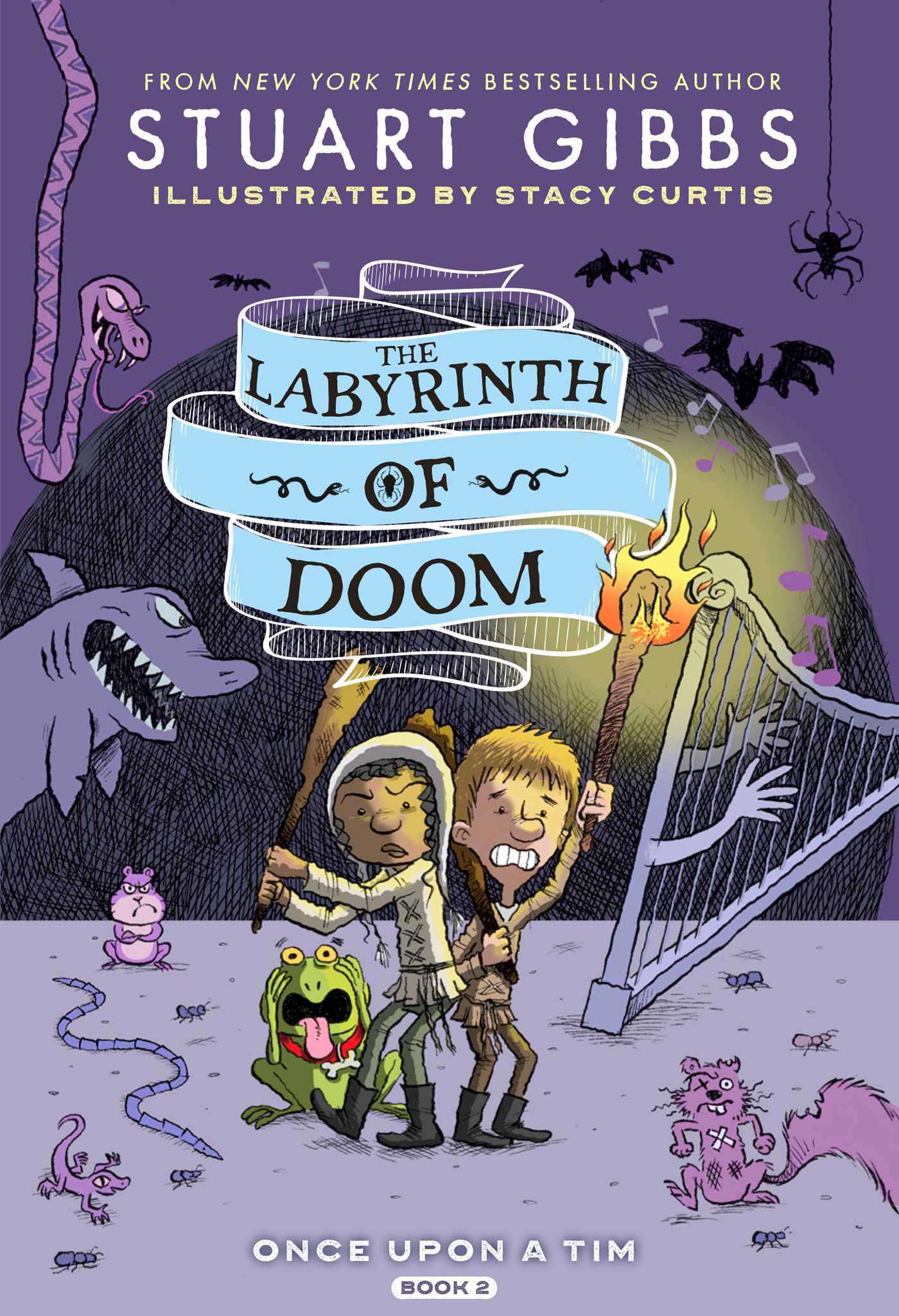 Today we are very excited to share an interview with Author Stuart Gibbs (The Labyrinth of Doom: Once Upon a Tim 2) conducted by Junior YABC staff member, Nathan Reid!

Read on to learn more about him, his book, and a giveaway! 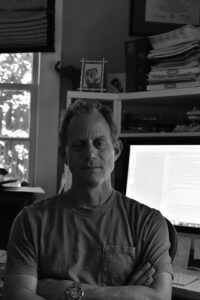 Stuart Gibbs is the New York Times bestselling author of the Charlie Thorne series, FunJungle series, Moon Base Alpha series, Once Upon a Tim series, and Spy School series. He has written screenplays, worked on a whole bunch of animated films, developed TV shows, been a newspaper columnist, and researched capybaras (the world’s largest rodents). Stuart lives with his family in Los Angeles. You can learn more about what he’s up to at StuartGibbs.com.

Stacy Curtis is the illustrator of The 7 Habits of Happy Kids series by Sean Covey and the Once Upon a Tim series by bestselling author Stuart Gibbs. He lives with his wife and dog in Oak Lawn, Illinois.

About the Book: Labyrinth of Doom: Once Upon a Tim 2 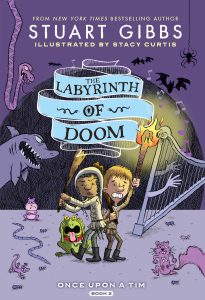 Knight-in-training Tim and his best friend, Belinda, embark on a quest to save Princess Grace in this second book in the hilarious, highly illustrated Once Upon a Tim middle grade series from New York Times bestselling author Stuart Gibbs.

Prince Ruprecht is VERY UPSET that knights-in-training, Tim and Belinda, have thwarted his plans and ruined his chances with Princess Grace. And so, to get even, he has kidnapped the princess and trapped her in the most complicated, dangerous, complex, dastardly, biggest (okay you get the point)…and scariest maze in all the world!

Now it’s up to Tim, Belinda, Ferkle, and Rover to fend off menacing beasts (like the minotaur), conquer treacherous obstacles (like chasms filled with cave sharks), find their way through the labyrinth (which is very tricky), and rescue the princess before time runs out. Oh, and also they need to remember how to get back out again…or they’ll be trapped inside the maze forever.

Nathan: What made you think of the idea for Once Upon a Tim?

I had the idea quite a while before I wrote the book. I was watching one of the many, many
animated Disney movies about a princess with my children and it occurred to me that, no
matter how bad the princess’s situation was, everyone else’s situation back in olden times was
probably worse. Because if you weren’t royalty, you were a peasant, and being a peasant was
terrible. So I thought it would be fun to tell the story of a peasant who wanted more. The only
way any peasant could move up would be to become a knight, which seemed like a good start
for an adventure. I had originally considered that it might be an animated movie or TV series,
but it worked really well for an illustrated book.

Nathan:  Who is your favorite character and why?  (we won’t tell the rest of the cast!)

It is really hard to pick one character over all the others, because I really did put lots of time and
energy into creating all of them. I suppose I feel closest to Tim, because his voice is really my
voice. I just imagine myself in all the situations he ends up in. But I should also say that Rover
is based on my dog, and when you see what Rover is thinking, that is what I imagine my dog is
thinking, so I really like him too.

Nathan: This book has more fantasy elements than your other series.  Why the change?

Once I hit upon the idea for this story, I realized there were so much folklore and mythology
that I could make fun of. I mean, think about the myth of the labyrinth and the minotaur. That
story is ridiculous. It was really fun to set a series in a world so unbound by reality, because I
can do anything that occurs to me. I can have talking horses or giant carnivorous butterflies or
monsters made out of rocks and it all is completely acceptable.

Nathan: Many of your books have humor about poop.  Why is there less potty humor in this
series?

Here’s a secret you should know: Even your parents like poop humor. (They just might not
admit it.) That said, I don’t want to overuse it. I don’t really go out of my way to include poop
humor. But if it naturally fits within a story, I’ll use it. So, there are some poop jokes in the first
Tim book, where he explains that as a peasant, he doesn’t have a toilet, which seemed to me
like a perfectly natural complaint that most readers would agree with. But in the second book, I
didn’t really have any poop jokes, because there wasn’t a place for them in the story.

Nathan: How many books do you plan to write in the Once Upon a Tim series?

I don’t know. I really enjoy writing this series, so I hope that I will have the chance to write
many more books.

Nathan: Will Fr-dog ever turn back into a dog?

Probably not. If anything, he’s much more likely to turn into another different animal.

Nathan: Will the town ever know how smart Ferkle is?

Nathan: How do you write so many new books for different series each year?

I like being able to jump from one series to another. I have to be very organized though. It
involves lots of planning.

Nathan: Your books are always really funny. How do you plan those funny sequences
of events?

I brainstorm a lot before I start writing, trying to think of a few funny sequences I can use. But
occasionally, with the Tim series, an idea will pop into my head as I’m writing and if it makes me
laugh, then I’ll use it.

Nathan: Why did you become a writer?

I have simply enjoyed writing for as long as I can remember. Being an author has been my
dream job for my entire life.

Mysteries, comedies and nonfiction books about science and history.

Nathan: Do you have any new series you are planning?

At this point I am working on four series, so starting a new one any time soon is unlikely.

Nathan:  When can we expect the next books in your other series?

Whale Done, the eighth book in the FunJungle series, will be released on February 21, 2023.
The third Tim book, Sea of Terror, will be out on May 9. And the eleventh Spy School book
(which is still untitled) will be out on September 5. I also have a Batman graphic novel with DC
comics – Bruce Wayne: Not Super – which will be out on March 14.

Nathan: Of all the series you have written, which is your favorite?

I don’t have a favorite. If I did, I would only write that series. But I love them all.

Nathan: Would you ever do a crossover series with Ben Ripley, Charlie Thorne, and Teddy
Fitzroy?

If I had the right idea, then I would do it. But I haven’t had that idea yet.

Title: The Labyrinth of Doom: Once Upon a Tim 2

Five (5) winners will receive a copy of The Labyrinth of Doom: Once Upon a Tim 2 (Stuart Gibbs) ~US ONLY

Tags: giveaway, Interview, S&S BFYR, Stuart Gibbs, The Labyrinth of Doom: Once Upon a Tim 2

5 thoughts on “Author Chat With Stuart Gibbs (The Labyrinth of Doom: Once Upon a Tim 2), Plus Giveaway! ~ US Only!”

You are here: Author Chat With Stuart Gibbs (The Labyrinth of Doom: Once Upon a Tim 2), Plus Giveaway! ~ US Only!