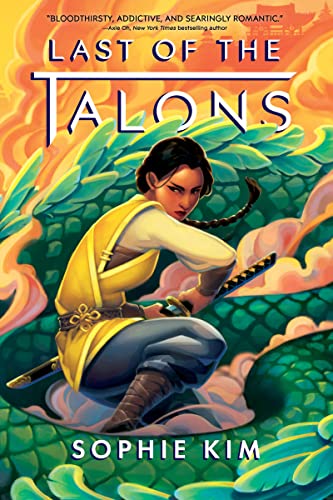 Today we are very excited to share an interview with Author Sophie Kim (Last of the Talons)! 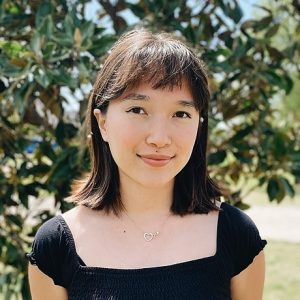 Sophie Kim spends her days both studying at her university and writing her novels, which are strongly influenced by her firm belief that diversity and non-stereotypical representation in literature are vastly important. Blessed (or cursed) with a voracious appetite for all things bookish, Sophie can often be found wandering the aisles of a library or curled up with a precariously balancing stack of stories. Last of the Talons is her first novel. sophiekimwrites.com

About the Book: Last of the Talons 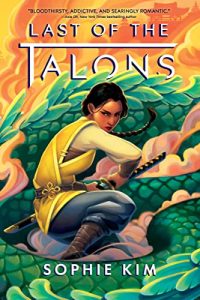 After the destruction of her entire Talon gang, eighteen-year-old Shin Lina—the Reaper of Sunpo—is forced to become a living, breathing weapon for the kingdom’s most-feared crime lord. All that keeps her from turning on her ruthless master is the life of her beloved little sister hanging in the balance. But the order to steal a priceless tapestry from a Dokkaebi temple incites not only the wrath of a legendary immortal, but the beginning of an unwinnable game…

Suddenly Lina finds herself in the dreamlike realm of the Dokkaebi, her fate in the hands of its cruel and captivating emperor. But she can win her life—if she kills him first.

Now a terrible game of life and death has begun, and even Lina’s swift, precise blade is no match for the magnetic Haneul Rui. Lina will have to use every weapon in her arsenal if she wants to outplay this cunning king and save her sister…all before the final grain of sand leaks out of the hourglass.

Because one way or another, she’ll take Rui’s heart.

Even if it means giving up her own.

At the root of it, I think, was the desire to see more non-stereotypical Korean representation in fantasy. Growing up, there were very few places where I saw characters who shared my identity in the spotlight, and the feeling of isolation that brings is incredibly potent and can have real consequences on mental health and confidence in heritage. When you use books to escape, but you’re just as ostracized in the pages as you are in daily life, it’s difficult to imagine ever finding your place anywhere. There were other muses for LAST OF THE TALONS, though—such as my love of Korean mythology and fairy tale retellings, not to mention the BTS song, Pied Piper. Combining all four of these things led to the formation of my debut novel.

This question is a hard one, because truthfully speaking, they’re all my babies (save for a select few). But if I had to choose, at knife point, it would be the main character. Lina has gone through so much, but her resilience has never wavered. I think that’s something to be admired, especially considering the journey she undergoes in the novel. Grief and guilt and addiction have handed her a surplus of trials, but she’s a fighter, through and through. I also adore the layers to her. On the outside, she’s a battle-hardened assassin with a sharp tongue and a cold disposition. But on the inside, she’s a girl who longs for family, friends, and a chance at love. In a way, those two parts are foils to the other, making her a very contradictory character. Exploring the different facets of her personality is something that always yields a few surprises.

Without giving too much away, there’s a very beautiful scene in the novel where Lina gets a goodbye she was harshly deprived of. It’s beautiful and bittersweet, a reunion that she really needs in order to begin the long and arduous process of healing. Lina carries a lot of emotional trauma upon her shoulders, and this scene—while not an all-healing balm in any way—at least manages to lighten that load enough for her to start picking herself up again.

That the first draft doesn’t need to be perfect. I used to pain over every paragraph, rereading as I went. Ironically, that actually hindered me from writing to my fullest potential. It’s better to let the words pour out of you, as messy as they may be. You’ll have time to fine-tune them in editing. Transferring the story in your head onto paper should feel free and messy. It’s raw creativity, and there’s something incredibly beautiful about that sloppy first draft you might hate.

Everything! Ashley Mackenzie (ashmackenzie.com) is an amazing artist, and the way she captured Lina is identical to how I visualize her in my head. The colors are fantastic. I love how vivid they are, especially upon the Imugi (the enormous serpent circling Lina). The scene depicted on the cover is directly derived from the book, and seeing that chapter come to life with such wonderful mastery has me in eternal awe.

THE GIRL WHO FELL BENEATH THE SEA by Axie Oh was wonderful. It reminded me of a Studio Ghibli film, and the Korean mythology woven into the story was just gorgeous. Axie’s prose is also incredibly lovely to read (and receiving a blurb from her was one of the best days of my life).

Funnily enough, the names of the main characters from GIRL and TALONS are quite similar! Mina and Lina.

My adult debut, THE GOD AND THE GUMIHO, is coming 2024 from Del Rey Books. I’m especially excited about this novel as it features a trickster god turned detective pairing up with an annoyingly alluring gumiho to track down a demon. I’m also hard at work editing the second book in the TALONS trilogy!

Again, I don’t want to give too much away—but throughout the book, you’ll find a series of flashbacks. Each one is leading up to one particular night, a night where everything went horribly wrong for Lina. As mentioned in the book’s synopsis, Lina is the one remaining Talon in the current timeline, and exploring how that came to be was a very raw experience. Lina is a character who, despite what first impressions may suggest, is extremely loyal and loves very deeply. Writing that final flashback scene was incredibly painful. It was the end of a family. It didn’t make it any easier that Lina had been the last Talon since Chapter One. Writing the scene that sparked so much pain for her was incredibly emotional.

Finding Rui’s voice was, at first, a bit difficult. He’s very suave, and never backs down from a chance to banter. He also tends to run cold, and then hot, and then cold again, switching up his moods like a sleight of hand. Everything he says—although it may not seem like it upon first glance—has careful thought behind it, but he takes pains to appear smooth and nonchalant to hide the guilt that he (like Lina) also feels. Additionally, Rui fancies himself a comedian. I always say that one of the most difficult parts of being an author is having to embody a character who is ten times funnier than you are. I’m proud to say that I’ve long since gotten the hang of it. Now, writing Rui is natural. He just speaks to me.

That you can find happiness in the most unexpected places. For much of the book, Lina is coming from a very dark place. She’s hurting, deeply. Happiness seems like an abstract concept she’ll never experience again. But, to her surprise, she does begin to feel that emotion again—and in the most unlikely situation possible.

(Another lesson could be to not steal from Dokkaebi emperors.)

Title: Last of the Talons

4 thoughts on “Author Chat With Sophie Kim (Last of the Talons), Plus Giveaway! ~ US Only!”

You are here: Author Chat With Sophie Kim (Last of the Talons), Plus Giveaway! ~ US Only!