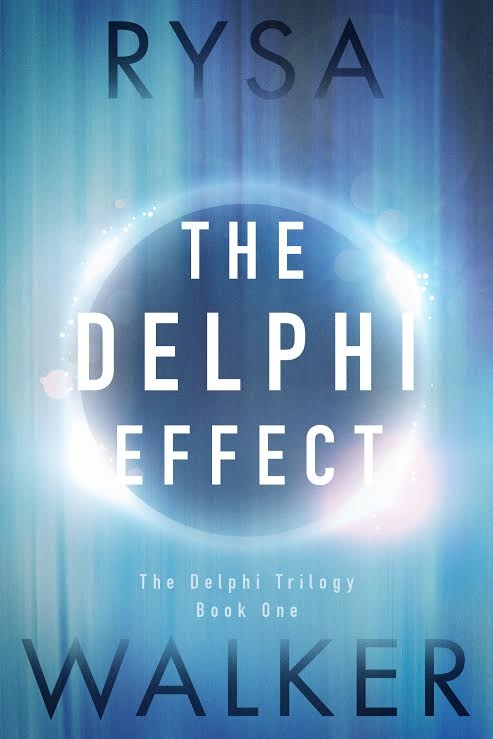 Today we’re chatting with Rysa Walker, author of The Delphi Effect!! Read on for more about Rysa and her novel as well!

RYSA WALKER: The Delphi Effect was inspired by early morning stupor., music, and conspiracy theories. I’m not a morning person, and neither are my kids, but whoever is in charge of our school district thinks that teenagers need to be in class at the crack of dawn. The morning routine with my two sons was to haul our sleepy behinds into the van and turn on our carefully curated playlists of songs that all three of us liked, because mornings are horrible enough without having to listen to music you hate.

One morning when I was driving back to the house, two songs came on, one after the other. The first was “Oh, Lately It’s So Quiet,” by OK-Go. The second was “42,” from the Viva La Vida album by Coldplay. Both are about ghosts, but one line from the Coldplay song–“Those who are dead are not dead, they’re just living in my head”–stuck with me.

But I knew the story wasn’t really about someone who has the power to “pick up” ghosts. The real story was about a secret government program that created that power. A program that the CIA said was a waste of money. A program they said they abandoned.

And even though I was in the middle of writing something else, and even though I had a day job at the time, I had to stop and get the story started. The first five chapters of The Delphi Effect were written in spare moments over the next few weeks, between grading final papers. Then Timebound won the Amazon Breakthrough Novel Award and grading was no longer on my agenda, but the story had to wait until I wrapped up the other two books in The CHRONOS Files series. Any time I got stuck on one of those books, however — or when time travel headaches were making me crazy — I’d open the file and go play around with Anna, Deo, Aaron and the others for a bit to clear my head.

RYSA WALKER: I’m not sure I have a favorite character, but I do have a favorite relationship — Anna and her foster brother, Deo. They’ve both been through so much, but they’ve learned the very important lesson that family isn’t just a group of people related to you by blood. Family can also be something you create. Their relationship is, in many ways, the heart of this book. Scenes with Anna and Deo always seemed to write themselves, probably because those two characters were so clear in my mind.

RYSA WALKER: The novel. It’s almost always the novel that comes first for me. I sometimes don’t know the title until the very end. In fact, The Delphi Effect had a truly lame working title–“Ghost Text,” referencing the opening scene with Anna and Porter– for several years while I finished up The CHRONOS Files.

RYSA WALKER: It’s a virtual tie between two scenes. The first is kind of spoilerish, so I’ll just say that’s it’s Molly’s goodbye and leave it at that. The second is the scene in Dr. Kelsey’s office when Anna allows Molly ghost to control her so that they can convince Porter, Molly’s grandfather, to trust Anna. I’m a sucker for scenes that make me cry as a reader, and that was one that definitely brought tears to my eyes as I wrote it.

RYSA WALKER: Once I’ve found the characters and know the general course the book needs to take, I have to let the characters take over. When I fail to do that, my imaginary friends stop talking to me and that’s a very, very bad thing. When it happens, I’ve learned to take a break, clear my head (maybe even clean my desk…or <shudder>clean out the fridge), and eventually I’ll get to the point where I can hear their voices again. If I keep plugging along, trying to force them to do what I think they should do, I end up with garbage scenes that I’ll have to rip out.

Oh…and I’ve also learned to save all of the garbage scenes that I rip out in a separate file, just in case there’s something in there that I can recycle. 🙂

RYSA WALKER: I’ve just completed final edits on the last issue of Time Trial, a comic series connected to The CHRONOS Files. All four issues will be combined into a graphic novel which debuts in November. Working on a comic series has been a blast, watching as the ideas on paper take form under the hand of the artist. Agustin Padilla has done an incredible job bringing Cleo and company to life.

And now that Time Trial is wrapped up, I’m diving into working full-time on book two of The Delphi Trilogy, The Delphi Deception.

RYSA WALKER: The scene in the offices of Quinn Investigative where Molly is talking about the days leading up to her death. Those are the darkest areas of the book, and I didn’t want to gloss over the more brutal aspects of her murder. On the other hand, I didn’t want to linger in that dark place too long. It was one of those times where I put the narrative entirely into the hands of the character. What’s there is what Molly could bring herself to share.

RYSA WALKER: Taylor. She speaks her mind, with very little filter, and that can be annoying. Taylor’s a good person, but she tends to act without really thinking about the consequences. Or, in some cases, she fully understands the consequences and just barrels ahead anyway. I think most of us know someone like that–someone who is capable of not only getting on your very last nerve, but dancing on that nerve with complete abandon. But, despite being a pain in the butt, if the world came crashing down, you know they’d have your back. That’s Taylor — and it can be tough sometimes to keep her from coming across as a self-centered brat.

RYSA WALKER: Caffeine-fueled panic, especially when deadlines approach. And yes, that is a superpower.

RYSA WALKER: Rescue animals, especially Triad Golden Retriever Rescue here in North Carolina. Our last two dogs were from that group, and they do a wonderful job of placing homeless dogs with families that match their needs.

RYSA WALKER is the author of the bestselling CHRONOS Files series. Timebound, the first book in the series, was the Young Adult and Grand Prize winner in the 2013 Amazon Breakthrough Novel Awards.

Rysa grew up on a cattle ranch in the South, where she read every chance she got. On the rare occasion that she gained control of the television, she watched Star Trek and imagined living in the future, on distant planets, or at least in a town big enough to have a stop light.

She currently lives in North Carolina, where she is working on her next series, The Delphi Project. If you see her on social media, please tell her to get back into the writing cave.

For news and updates, subscribe to the newsletter at rysa.com/contact.

For a chance to enter the giveaway, click HERE!

You are here: Author Chat with Rysa Walker