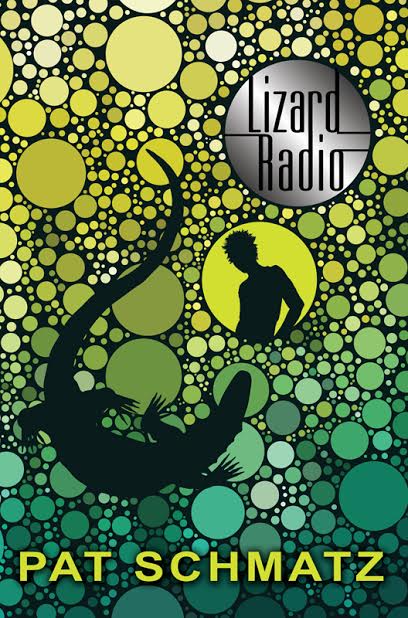 Eden Grey: Where did the concept of Lizard Radio come from? Did you start with the main character, Kivali, or was it something else?

Pat Schmatz: The concept for Lizard Radio started in my sketch book a few summers back. I drew a picture of a lizard (not a very good picture). The lizard wore headphones with a cord that connected to nothing, and whispered something about being a very young lizard alone in the world. The lizard was desperately searching for a signal. That got my attention, and started a long process of getting to know the lizard. Part of that process was learning how to draw a lizard!

EG: Kivali is a strong and confrontational main character ‐ where did her traits come from? Is there anything of yourself in Kivali?

PS: Kivali and I share a lot of the same emotions and questions and ideas about the world, but she’s much better at taking action and holding steady than I ever was. She is who I wish I could have been – my best imagining of my best young self in an entirely different situation.

EG: Can you tell us about being a “bender” and what that means in the context of Lizard Radio?

PS: The world of Lizard Radio has a very complex set of rules around gender, with the goal of assigning everyone to the gender that best fits them. There’s not much room in that world for in­ betweens of any kind – the gov would say that in­betweens make for confusion, conflict and unhappiness. The official definition of bender is one who falls midway between male and female (as defined by the gov’s gender testing on a single continuum), but the term is also used as a general slur for anyone steps outside of gender norms. The gov’s gender program is designed to help all youngsters choose the correct gender, move out of the bender range, and become clearly defined and responsible adults in community. Some like Kivali remain mid­range benders despite all “help” from the gov. Their chances of acceptance and success are minimal.

EG: Where did you get the idea for CropCamp?

PS: My parents ran a summer camp for boys throughout my childhood. It was a family business so I was very involved, and I’m very familiar with – and fond of – the camp setting. I also spent many summers in girls’ camp as a camper and counselor. The world of Lizard Radio needed a lot of organic produce (the public health consequences of factory farming had become alarming), which would require cheap labor. What better source of labor than teenagers in a mandatory program? Of course, there are lots of other kinds of camps too – but CropCamp is the catchall for teens without a clear talent or proficiency to take them to more specialized learning and labor. The gov’s labor source turned out to be a perfect way for me to bring teenagers together in the woods where (I learned as a teen at girls’ camp) most anything can happen.

EG: What kind of influence did you have on the fantastic and hypnotic cover design for Lizard Radio?

PS: Cover design is one of my favorite parts of the publishing process. I had said that I was hoping for a komodo dragon on the cover (I sent a few pictures for reference). Candlewick Book Designer Pam Consolazio’s beautiful and textured design knocked me out from the start. I could never have come up with something that other­worldly and fitting for the book on my own.

EG: What can readers look forward to from you next?

PS: That’s a good question. I’m working on a middle­grade novel, but I also have an idea for a companion novel to Lizard Radio. I don’t like to work on two things at once, but both ideas are bombarding me. So far, that means really slow progress on both, and I can’t tell yet which one will rise to the top.

A big thanks to both Pat Schmatz and Eden Grey for this enlightening interview! For more about Pat, her book, and (drumroll……….) the lastest giveaway, read on! 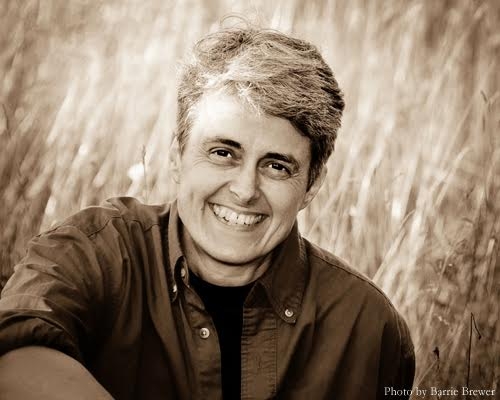 Pat Schmatz is the author of Bluefish, which garnered three starred reviews and about which School Library Journalsaid has “all the hallmarks of a classic.” About Lizard Radio, the author says, “I keep a notepad with sketches and ideas, and one day, a lonely lizard wearing headphones came out of my pencil. When I tuned in, I found this story.” Pat Schmatz lives in Wisconsin and Minnesota.

Fifteen-year-old bender Kivali has had a rough time in a gender-rigid culture. Abandoned as a baby and raised by Sheila, an ardent nonconformist, Kivali has always been surrounded by uncertainty. Where did she come from? Is it true what Sheila says, that she was deposited on Earth by the mysterious saurians? What are you? people ask, and Kivali isn’t sure. Boy/girl? Human/lizard? Both/neither?

Now she’s in CropCamp, with all of its schedules and regs, and the first real friends she’s ever had. Strange occurrences and complicated relationships raise questions Kivali has never before had to consider. But she has a gift—the power to enter a trancelike state to harness the “knowings” inside her. She has Lizard Radio. Will it be enough to save her? A coming-of-age story rich in friendships and the shattering emotions of first love, this deeply felt novel will resonate with teens just emerging as adults in a sometimes hostile world.

Sounds great, right? Click HERE to pre-order and keep reading for a chance to win your very own copy! 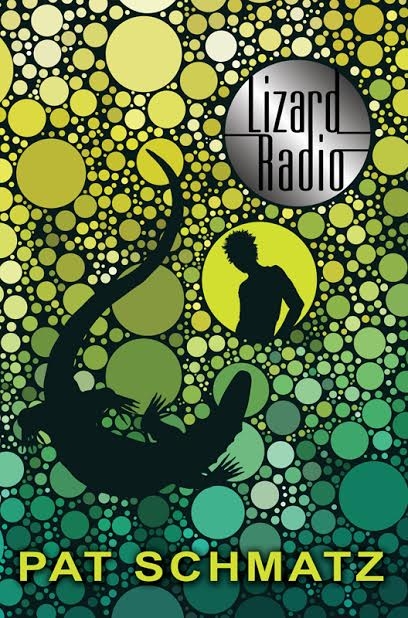 Three winners will receive a copy of Lizard Radio and Bluefish, US only. 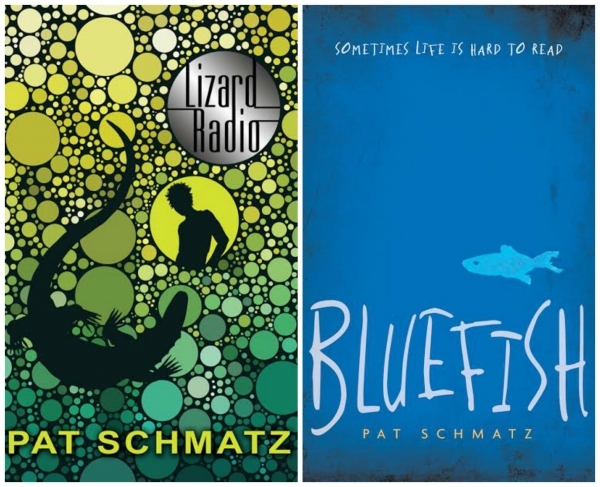 Entering is simple, just fill out the entry form below. During this giveaway, we have a question for entrants. Here is the question they’ll be answering in the comments below for extra entries: What unusual (for lizards anyway) accessory did Pat’s first lizard wear?

You are here: Author Chat with Pat Schmatz