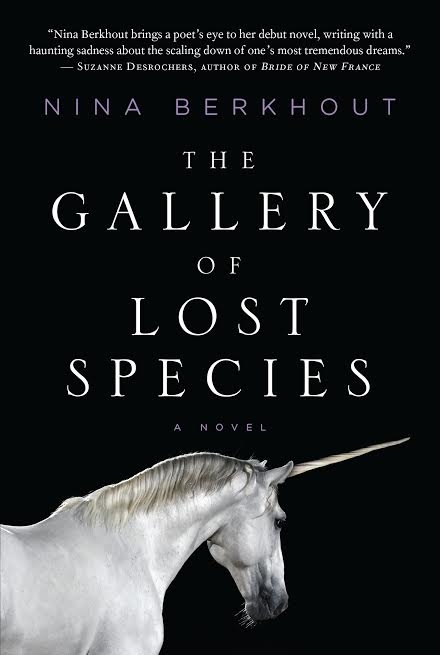 author of The Gallery of Lost Species!

Below you’ll find our interview, plus a giveaway!

A dictionary word of the day that I received in my inbox one morning. The word was cryptozoology (the search for creatures which may or may not exist, for which there’s no scientific proof). I became obsessed with learning everything I could on the subject and I knew that I would write about it.

It doesn’t come magically. It’s hard work and it’s full time. I don’t mean that you can’t have a day job. But you have to carry your story with you and always be thinking about, especially when you’re not writing. Also, when you think you’re finished your draft and you’ve delved as deeply as you possibly can, well, that’s just the beginning.

The unicorn because it looks so real. My hope is that by the end of the book readers will be open to believing that these creatures could exist in some faraway, difficult-to-reach place that hasn’t been explored by humans yet. My novel is a family drama but a lot of people think it’s a fantasy or science fiction story because of the unicorn on the cover. Which is fine by me!

13 Ways of Looking at a Fat Girl by Mona Awad

Our Souls at Night by Kent Haruf

I have a YA novel coming out in 2017. It’s a love story that takes place in a small town in Montana, and it involves a mosaic.

Definitely drafting. The revising is the hard part.

Being invisible. I think a lot of writers have that superpower, which helps with developing good observation skills!

Meet The Gallery of Lost Species! Edith grows up in her big sister Vivienne’s shadow. While the beautiful Viv is forced by the girls’ overbearing mother to compete in child beauty pageants, plain-looking Edith follows in her father’s footsteps: collecting oddities, studying coins, and reading from old books.

When Viv rebels against her mother’s expectations, Edith finds herself torn between a desire to help her sister and pursuing her own love for a boy who might love her sister more than he loves her. When Edith accepts a job at the National Gallery of Canada, she meets an elderly cryptozoologist named Theo who is searching for a bird many believe to be extinct. Navigating her way through Vivienne’s dark landscape while trying to win Liam’s heart, Edith develops an unlikely friendship with Theo when she realizes they might have more in common than she imagined; they are both trying to retrieve something that may be impossible to bring back to life.

The Gallery of Lost Species is about finding solace in unexpected places – in works of art, in people, and in animals that the world has forgotten.

NINA BERKHOUT is the author of five poetry collections, most recently  Elseworlds, which received the 2013 Archibald Lampman  Award for the year’s best poetry. Her earlier work has been shortlisted  for THIS magazine’s Great Canadian Literary Hunt, The Archibald Lampman  Award, and the John Hirsch Award. Originally from Alberta, she now resides in Ontario, where she works at the National Gallery of Canada.

Two winners will recieve a copy of The Gallery of Lost Species (US & Canada only).

6 thoughts on “Author Chat with Nina Berkhout, (The Gallery of Lost Species), + Plus Giveaway!”

You are here: Author Chat with Nina Berkhout, (The Gallery of Lost Species), + Plus Giveaway!