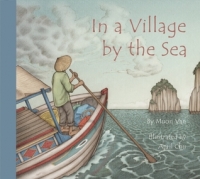 We actually didn’t meet until the illustrations were done. With the exception of one small email exchange mediated by our editor, there was no real-time collaboration or other interaction. April produced these magnificent illustrations from only reading the manuscript and knowing that the story was dedicated to my father, who was a Vietnamese fisherman.

No immediate plans though we both have new books coming out from Creston this fall! April’s gorgeously illustrated book, Ada Byron Lovelace and the Thinking Machine, is about a woman who was both a talented mathematician and the world’s first computer programmer. My book, The Little Tree, is a fable that touches upon familial and environmental themes and has been generously called “The Giving Tree for a new generation.”

The Witchery
Azreya, Aztec Priestess
The Twins of Moon
The Sea of Stars: Book 2 of The Twins of Moon
The Undead Truth of Us
A Girl's Guide to Love and Magic
No Admissions (The Infamous Frankie Lorde #3)
Daybreak on Raven Island
Something Beautiful
Something About Grandma
Spineless
A Duel with the Vampire Lord (Married to Magic, #3)
A secret Princess
The Drowned Woods
Rise of the Snake Goddess (Samantha Knox, #2)
The Honeys
Echoes of Grace
Big Game (FunJungle #3)
Lion Down (FunJungle #5)
Panda-monium (FunJungle Book 4)
Punky Aloha
When Santa Came to Stay
Busy Betty
Raising the Horseman
Hunterland
Armadas in the Mist
The Darker the Skies
Jester
Zyla and Kai
Meet the Moon

You are here: Author Chat with Muon Van and April Chu