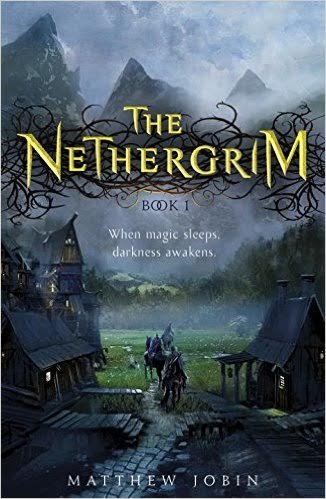 YABC: What surprised you most while writing your latest book?

Matthew Jobin: What surprised me the most about writing THE SKELETH was Tom. Readers of THE NETHERGRIM will know him as the shy, calm orphan yoked into a life of slavery and toil by his vicious master Athelstan. I had long­range plans for the way that Tom was going to develop throughout the series, but as I worked on the THE SKELETH, I felt him growing and changing in ways I had not predicted. I tried to fight it, at first, but one thing I have learned about writing so far is that neither inspiration nor logic can be master all the time. Eventually, I had to give in and follow his voice, developing another side to his character that was only hinted at in THE NETHERGRIM. All three of my heroes—Edmund, Katherine and Tom—are central to the story, and all three of them represent a different form of heroism. In THE SKELETH, it was the changes in Tom that surprised me the most, because they came organically out of the process of writing and were not planned ahead of time. He’s not so shy and calm after all!

YABC: If you could live in any fantasy world, which one would it be?

MJ: Here’s the tricky bit about adventure: would you want one, if you could choose to avoid it? A real adventure must have true danger, wrenching changes and uncertainty. To pass through such a thing and survive makes you wiser and more accomplished, but any real adventure has to hurt. Who wishes to hurt? No one, but who can imagine a realistically human world where no one hurts, no one suffers and changes?

I have noticed that scary and uncertain things in my own life become my favorite stories once I have passed through them and survived. On looking back, I know that what I suffered through changed me for the better, but at the same time if I had known ahead of time, I might have tried to avoid it. So, assuming that I am still a real, growing, living and changing human, I would have to answer that I would most like to live in a fantasy world that would not be the one that would make me the most comfortable—indeed, one in which I might be in danger of a painful and untimely death. Perverse, no?

YABC:  Do you have a mantra that gets you through the drafting phase?

MJ: Yes, but it is not printable 🙂

MJ: I love running, even though I’m as slow as molasses in January. I do it for exercise, for scenery and the ideas that sometimes hit me sideways when I’m deep in the trance of putting one foot in front of the other. I bring my phone along with me, and if I think of something while running I make a voice memo. The trouble is that if I don’t transcribe the memos as soon as I get home, I’ll forget what I meant by them. Then, weeks later, I’ll come across a memo of me gasping for breath and mumbling something I can barely make out. I think I’ve lost whole book ideas that way!

MJ: Tom! See the answer to question 1 above. There was a runner­up, though, and that was Lord Wolland. I had trouble restraining myself from wanting to reach right through the screen of my laptop and punch him in the nose!

YABC: Do you enjoy writing to music? If so, do you have a go­to playlist?

MJ: There are times when I do not write to music, but they are few and far between. Generally speaking, I like writing to a subset of my favourite music that is relatively light on lyrics. I remember once writing while listening to a singer I like, and then going back over what I had done and finding I had accidentally typed some of the lyrics into the book! I sometimes listen to classical music while I write, mixed with the soundtracks of some of my favorite movies—Gladiator, Samsara, and Inception, to name a few. I also have a playlist of bands who either do little singing or at least do not sing in English; for example, I love listening to Sigur Ros while I work, because I love the music and have no idea what Jon Thor Birgisson is singing. The same holds for bands like MONO and Mogwai, who are often in my work playlist. For the same reason, I love Lisa Gerrard’s work, evocative and powerful but mostly wordless. Music like that fills me with moods and impressions without shoving words into my ears, perfect for letting me drift into the world of the series.

Special mention: While I was waiting for the first phone interview with the publisher who eventually signed me, I listened to Rider on the Wheel by Nick Drake was playing. It helped calm me down a bit.

MJ: Readers of THE NETHERGRIM would likely be able to guess that I feel a deep empathy for the animals with whom we share this world. Animal welfare and our place in the environment are concerns that are close to my heart.

YABC: What’s a book that you’ve read recently that you would recommend to your readers?

MJ: Believe it or not, I only just recently read The Martian Chronicles by Ray Bradbury. It’s obvious to me why it is a classic—even though I’m not usually crazy about allegory, when it is done well it creates a field for deeper thought that goes beyond the plot of the book itself. Bradbury is a master at that sort of thing, and a think it is because his allegories are not attempts to oversimplify the world and bludgeon the reader over the head with his belief in what is right. The Martian Chronicles tells many stories in one, and lets the reader decide who, if anyone, should be believed in or admired.

MJ: It depends very much on how each part is going. On days when a whole chapter comes out of my fingers, it’s drafting. On days when the book in my hands takes on a complexity and depth I had not guessed at in the first draft, it’s revising. The Next Great Fantasy Epic is here! For fans of Ranger’s Apprentice and the Chronicles of Narnia.

Everyone in Moorvale believes the legend: The brave knight Tristan and the famed wizard Vithric, in an epic battle decades ago, had defeated the evil Nethergrim and his minions. To this day, songs are sung and festivals held in the heroes’ honor. Yet now something dark has crept over the village. First animals disappear, their only remains a pile of bones licked clean. Then something worse: children disappear. The whispers begin quietly yet soon turn into a shout: The Nethergrim has returned!

Edmund’s brother is one of the missing, and Edmund knows he must do something to save his life. But what? Though a student of magic, he struggles to cast even the simplest spell. Still, he and his friends swallow their fear and set out to battle an ancient evil whose powers none of them can imagine. They will need to come together–and work apart–in ways that will test every ounce of resolve.

In a story reminiscent of the Ranger’s Apprentice epic and the Chronicles of Narnia, Matthew Jobin weaves reality, magic, and adventure into the next great fantasy phenomenon. A native of Canada, Matthew Jobin holds a Ph.D. in anthropology from Stanford University. He lectures in anthropology at Santa Clara University. The idea for The Nethergrim came to Matthew as a young boy exploring the forest surrounding his home. Intent on telling the story of this fantasy world, he’s been developing it and its inhabitants ever since. Matthew lives in the San Francisco Bay Area with his wife, Tina.

Three winners will receive a copy of The Nethergrim (US only).

4 thoughts on “Author Chat with Matthew Jobin, Plus Giveaway!”

You are here: Author Chat with Matthew Jobin, Plus Giveaway!