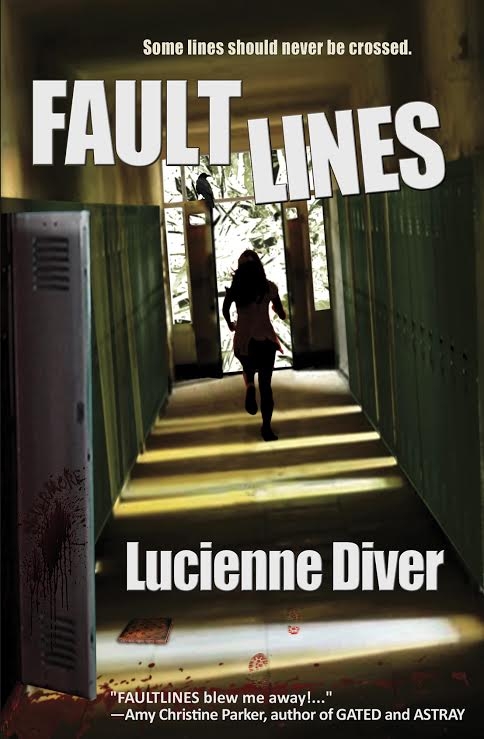 Below you’ll find more about Lucienne,

her book, plus a giveaway!

LUCIENNE DIVER: The idea for this book came to me during a school talk of all things. I was doing a presentation about plotting and I wanted an example of a storyline that would show strong conflict building toward an explosive climax. It all started off with the diary of a girl who had died and what it might reveal. The only problem was that it was missing and secrets from it kept turning up, raising tensions to dangerous, possibly murderous levels.

It was a good beginning, but I needed to know more. Why had the girl died? What were the secrets? The idea wouldn’t leave me alone. The novel itself started when I realized I had a main character who needed these same answers. And that the search put her right in the midst of the danger I envisioned.

LUCIENNE DIVER: I always want to answer that I love all my characters, which is true, but in this case I think my favorite might be a secondary character named Felicia. Faultlines is about what happens when a girl, Lisa, commits suicide and someone starts taking revenge against those they think drove her to it. My heroine Vanessa, as Lisa’s former best friend, becomes everyone’s main suspect, and so when people retaliate against the revenge, she’s the target. So many people turn against Vanessa, convicting her even in the absence of evidence. But even in the face of very strong opposition, Felicia stands up for Vanessa. She’s African-American. She knows what it’s like to be accused for no reason, looked on with suspicion, followed in stores just because of the color of her skin. She’s not going to make someone else feel the way she’s been made to feel. Felicia is my hero. So many people won’t stand up for what’s right for fear of taking the heat onto themselves. They’ll stay silent. Felicia is stronger than that.

LUCIENNE DIVER: The idea for the novel came first, but the title very quickly followed. Faultlines means so many things in this book. It deals with the fault many people find with themselves over Lisa’s suicide, thinking they should have seen the signs, they should have been able to save her. Or the fault they see in others—you did this, you are the reason why she’s dead. But it also speaks to actual faultlines, breaking points. Lisa had hers. The person taking revenge in her name, who goes by the handle Poetic Justice, clearly has a breaking point as well, as the vengeance escalates to extreme and dangerous levels. Vanessa has about all she can handle dealing with her best friend’s death, the feelings she has for Lisa’s almost-boyfriend, the accusations and attacks against her. The question is how she will handle it. It’s clear throughout the book that Lisa was the adventurous one, Vanessa was the “good” one, the quiet one, who never rocked the boat. But now the boat is being tossed about on a storm of fall-out from Lisa’s death, and she has to learn to fight for her survival.

LUCIENNE DIVER: I love the skewed perspective of the cover, because it ties in so well with the book itself. Vanessa’s whole world has been shaken, and it hasn’t settled back into any semblance of normalcy. I love the blood spilling out from the open locker, which ties directly into the first scene of Poetic Justice’s revenge. And the raven imagery on the door my heroine is running toward.

YABC: What new release book are you looking most forward to in 2016?

LUCIENNE DIVER: I’m really looking forward to reading Caleb Roehrig’s Last Seen Leaving.  I have my copy! Trying to save it to read on vacation in December but it’s calling to me!

LUCIENNE DIVER: I have a short story coming out in December in an anthology of stories based in Faith Hunter’s Rogue Mageseries, which I’m really excited about.  I’m also thrilled that next year Lore Seekers, a new division of Bella Rosa Books (publisher of Faultlines), will be reprinting my first four Vamped novels and bringing out the fifth, Fangdemonium.

LUCIENNE DIVER: The book opens at Lisa’s funeral with my heroine mourning the death of her best friend. It’s such a tough place to start, but it’s the only place that seemed right. I must have rewritten it half a hundred times, and I’m still not satisfied with it. I don’t think I ever will be. It’s not something that can be clean or pretty or perfect.

LUCIENNE DIVER: Always writing over revising! In drafting I give myself permission not to be perfect. My motto is “Get it down, then get it right.” So it’s a bit stream of consciousness. I think it, I write it.  (Which makes it sound a lot easier than it is, even getting out of my own way.) But revisions are when I look back at the scenes where I might have taken it easy, where I didn’t push myself enough or agonize over getting it just right, and then I force yourself to do just that. I read and revise and read and revise as many times as it takes to do justice to my characters and their stories.

LUCIENNE DIVER: Oh my goodness, I wish I had a superpower!  It would be to take away everyone’s pain. The pain that my various characters suffer through in this novel is so piercing. It echoes pain I know real people are feeling every day…that I’ve felt myself. I hope people get something out of reading Faultlines, whether it’s the sense that they’re not alone or the understanding of someone else’s side of a story. I also want anyone who sees him or herself in Faultlines to know where to go for help, which is why my webmistress is right now updating my website to include links to suicide and bullying helplines, many of which are below.

LUCIENNE DIVER: Yes! Many victims of abuse or bullying don’t speak out because they’re afraid of inviting further abuse or because they feel somehow responsible, as though they should have been able to prevent what happened to them. They keep the pain inside, and it’s corrosive. It eats away like acid. I want people to know that they can speak and be heard. I wish this were always possible for people at home, but when it’s not, here are some wonderful resources:

Thank you so much for giving me the chance to put this out there! Lucienne Diver is the author of the Vamped young adult series—think Clueless meets Buffy the Vampire Slayer—and the Latter-Day Olympians urban fantasy series from Samhain, which Long and Short Reviews calls “a clever mix of Janet Evanovich and Rick Riordan”.

Her short stories have appeared in the KICKING IT anthology edited by Faith Hunter and Kalayna Price (Roc Books), the STRIP-MAULED and FANGS FOR THE MAMMARIES anthologies edited by Esther Friesner (Baen Books), and her essay “Abuse” was published in DEAR BULLY: 70 Authors Tell Their Stories (HarperCollins). Lisa had changed, pushing away everyone close to her, even Vanessa. She had quit soccer. Started wearing dark and dismal clothes. She refused every offer to talk and suffered whatever she was going through in silence. Now she’s really gone. Suicide they claim, but Vanessa knows that isn’t right. It can’t be.

Vanessa blames herself for letting Lisa chase her off. She wants answers, so that she can put to rest the rumors surrounding Lisa’s death and so that she can move on, heal. But Lisa left no note and the journal she was always scribbling in—which might tell all—is mysteriously missing.

As Vanessa struggles to come to terms with the loss of her friend and to reconstruct the last months of Lisa’s life, someone calling themselves “Poetic Justice” begins taking revenge against those he or she thinks drove Lisa to suicide. Everyone at school believes Vanessa is this mysterious “Poetic Justice”. It’s easy to blame the former best friend, and Vanessa makes an obvious target.

Struggling with her own guilt, Vanessa is determined to ignore the threats and allegations aimed her way. But as Poetic Justice’s vengeance takes a darker turn, retaliation against Vanessa begins to escalate, from cyber bullying to violence, putting both her and the little sister she adores in the line of fire. To protect them both, she has to find out who’s behind the attacks before things turn deadly. And hope she can survive the truth.

Two winner will receive a copy of Faultlines as either an e-book or signed paperback, whichever the winner prefers (US only).
*Click the Rafflecopter link below to
enter the giveaway*

7 thoughts on “Author Chat with Lucienne Diver, Plus Giveaway!”

You are here: Author Chat with Lucienne Diver, Plus Giveaway!