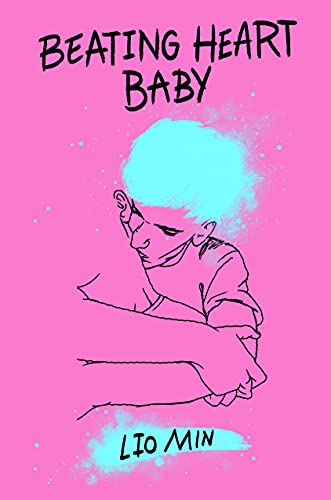 Today we are chatting with Lio Min, author of Beating Heart Baby 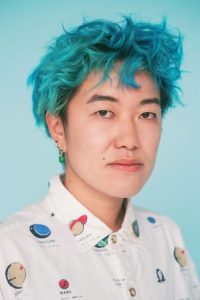 Lio Min has listened to, played and performed, and written about music for most of their life. Their debut novel Beating Heart Baby is about boys, bands, and Los Angeles. They’ve profiled and interviewed acts including Japanese Breakfast, Rina Sawayama, MUNA, Caroline Polachek, Christine and the Queens, Raveena, Tei Shi, Speedy Ortiz, and Mitski.

About the Book: Beating Heart Baby 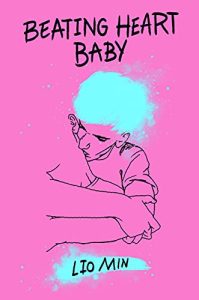 Santi has only had his heart broken one time, and it was all his fault. When he accidentally leaked his internet best friend Memo’s song, and it became an overnight hit, Memo disappeared—leaving their song’s cult fame, and Santi, behind.

Three years later, Santi arrives in Los Angeles with a mission: get over the ghost of Memo. Thankfully, his new school and its wildly-talented Sunshower marching band welcome him with open arms. All except for his section leader, the prickly, proud, musical prodigy Suwa. But when Santi realizes Suwa is trans, then Suwa realizes Santi takes his identity in stride, both boys begin to let their guards down. Santi learns Suwa’s surliness masks a painful, still raw history of his own, and as they open up to each other, their friendship quickly takes on the red-hot blush of a mutual crush.

Just as Santi is feeling settled in this new life, with a growing found family and a head-over-heels relationship with Suwa, he begins to put together the pieces of an impossible truth—that he knows both more and less of Suwa’s story than he’s been told. Their fragile fresh start threatens to rip apart at the seams again when Suwa is offered the chance to step into the spotlight he’s owed but has always denied himself. Now, Santi and Suwa must finally reckon with their dreams, their pasts—and their futures, together or apart.

PART ONE: A few summers ago, I worked as a camp teacher at a local children’s amusement park. I mostly worked with four-to-six year olds but the oldest kids at the camp were in their early teens. A lot of the kids had been referred over by a local LGBTQ organization and at least one of the kids I watched over was trans.

Many of the kids already had working notions of gender roles. I’d been reading a lot of gender theory “for fun” and separately was still in denial about my own dysphoric feelings. But something about realizing how early these ideas rooted in children really shook me. I’d half heartedly worked on a book proposal back in 2016 but suddenly, everything came together that one summer. There was this one very tender, kind, and considerate boy who left a deep impression on me, the other teachers, and his peers. He was my direct inspiration for Santi.

PART TWO: As I was wrapping up my first draft, I read Pachinko by Min Jin Lee. Ever since I was young I’ve had an intimate understanding of intra-Asian conflicts, but Pachinko’s depth and breadth blew me away and made me think about writing something that complicated the veneer of a unified Asian American identity. Pachinko was a direct inspiration for Suwa’s familial background.

PART THREE: For over a decade, I’ve been a music reporter, starting in live music and moving into interviews and broader features. This work reinforced my lifelong devotion to music while offering me an insight into the grimy machinery undergirding the commercial industry. Freelance music writing isn’t a very prosperous field, so I’ve taken various day jobs (like the camp gig) to cover rent, etc. I honestly started writing BHB as a way to pass the time at a lonely job in a windowless room.

PART FOUR: I did marching band in college and always thought to myself, “Damn, this would be a good setup for a book.”

PART FIVE: I grew up reading and watching a lot of shōnen (“young man”) manga and anime and wanted to write something based on the genre’s dominant themes and beats, but without its substantial attendant gender baggage. The two strongest style influences on BHB are the series Hunter x Hunter and FLCL.

The novel, kind of. My working title was The Sunshower Sessions — my boy owns a record by Dr. Buzzard’s Original Savannah Band and I love their song “Sunshower.” But about halfway through writing the first draft, I suddenly remembered an exchange I had with some old co-workers about “favorite crush songs.” My offering back then was by the pop-punk band Head Automatica . . . “Beating Heart Baby.”

Suwa’s interactions with his father in Track 19. Suwa’s father has changed a lot through various drafts and it took a while to arrive at a relationship and arc that felt more ambiguous and loaded, versus a soapier and perhaps standard rendering of that kind of person. (I was watching Riverdale when I first started writing and… that skewed my understanding of what a teen drama could/should be like.) I’m not Korean but a lot of East Asian cultural dynamics overlap with each other so after I finally sorted out what it was that I actually wanted to do with that characterization, I drew on some personal experiences and emotions about masculinity, memory, and pride. There’s some blood in the text. I cried, a lot, when I wrote the first “final” iteration of that chapter.

This was my first attempt at writing long fiction and no matter how much writing you’ve done before, you’ll have a learning curve in every new medium. I come from a critical background so learning to apply that to my own work was both incredibly helpful and also sometimes really, really frustrating. But if I found myself avoiding rereading and/or microediting a certain section of the book, why was that? What made me turn away, when my job is to keep the reader clued in and rapt? Figuring out how to walk the tightrope between intuition and narrative necessity, and understanding when to give myself some slack.

I have very strong design opinions so most of the examples I gave my publishing team re: cover design were album covers. Karen O of the Yeah Yeah Yeahs is one of the most important musicians in my own life and perhaps in modern rock at large, and I’m so lucky/smug that the design team agreed that the art for her solo album Crush Songs should be the reference for BHB’s cover. The searing and unmissable hot pink and neon blue and the simple, evocative, and painfully intimate line work image — when I first showed my friends the cover, they all agreed that it’d be a design people would tattoo on themselves, which, as someone who has a book cover illustration tattoo: highest praise.

It’s your life, but you’re never alone in it. Your body carries history, which can feel like an unbearable burden and certainly an unfair one, but your body also carries the future, for yourself but also countless others, which is also a burden but one that, with time and attention and love from others but most importantly yourself, can metamorphose from a stone to a set of wings. Stick around to fly.

I link out to these on my website but I’ll always beat the drum for the National Network of Abortion Funds, RIP Medical Debt, Tenants Together (but generally, tenants’ rights organizations), the Sogorea Te’ Land Trust (but generally, indigenous land back programs), and mutual aid between trans and GNC folks.

You may think you have patience but you won’t. For the publishing process, for the feedback loop from friends and perhaps family, and most of all for yourself. Don’t time yourself based on other people’s miles; what’s most important is hitting your own stride, because that’s when you might even have fun.

3 thoughts on “Author Chat with Lio Min (Beating Heart Baby), Plus Giveaway! ~US ONLY”

Today Tomorrow Never
Ashley Sprinkler: Ancient Sacred Twisted Journey
Mystical Adventure of Ashley Sprinkler (Ashley Sprinkler: Ancient Sacred Twisted Journey)
The Deadlands: Hunted
Tommy and the Order of Cosmic Champions
A Little Ferry Tale
Can't Get Enough Space Stuff
Lark & Kasim Start a Revolution
If the World Were 100 Animals
Kapaemahu
How to Succeed in Witchcraft
Spells for Lost Things
Secrets So Deep
The Take-Over Friend
Last of the Talons (Talons, #1)
Bad At Love
Grounded For All Eternity
The Wolves and Moose of Isle Royale: Restoring an Island Ecosystem
Up to No Ghoul
Thirst
Relatively Normal Secrets
My Life Begins!
Frigg’s Journey to Anasgar (Chronicles of Nadavir #1)
The Battle of the Snake (The Adventures of Crimson and the Guardian #1)
Nutcracker Night
Goth Girl, Queen of the Universe
Where's the Digger?
S'more Than Meets the Eye!: Ready-to-Read Graphics Level 2 (Nugget and Dog)
So Many Kisses!
Get Together

You are here: Author Chat with Lio Min (Beating Heart Baby), Plus Giveaway! ~US ONLY