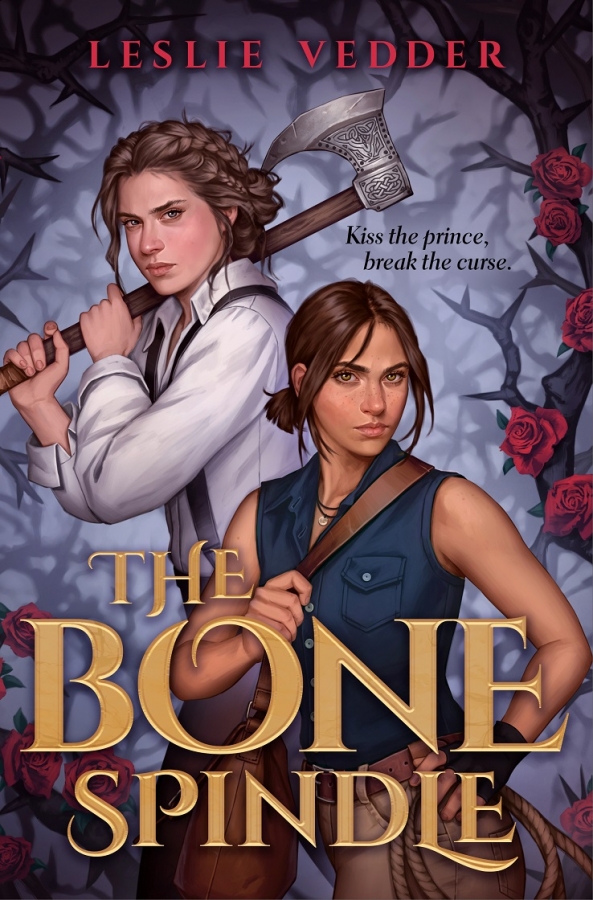 Today we are chatting with Leslie Vedder, author of

Read on for more about Leslie and her book!

Leslie Vedder (she/her) is a queer ace author who subsists primarily on coffee and cat snuggles!

She grew up on fantasy books, anime, fanfiction, and the Lord of the Rings movies, and met her true love in high school choir. She currently lives in Colorado with her wife and two ultra-spoiled house cats.

Her debut YA novel THE BONE SPINDLE is forthcoming in January 2022 from Penguin / Razorbill. Find her online at leslievedder.com.

Sleeping Beauty meets Indiana Jones in this thrilling fairytale retelling for fans of Sorcery of Thorns and All the Stars and Teeth.

Fi is a bookish treasure hunter with a knack for ruins and riddles, who definitely doesn’t believe in true love.

Shane is a tough-as-dirt girl warrior from the north who likes cracking skulls, pretty girls, and doing things her own way.

Briar Rose is a prince under a sleeping curse, who’s been waiting a hundred years for the kiss that will wake him.

Cursed princes are nothing but ancient history to Fi–until she pricks her finger on a bone spindle while exploring a long-lost ruin. Now she’s stuck with the spirit of Briar Rose until she and Shane can break the century-old curse on his kingdom.

Dark magic, Witch Hunters, and bad exes all stand in her way–not to mention a mysterious witch who might wind up stealing Shane’s heart, along with whatever else she’s after. But nothing scares Fi more than the possibility of falling in love with Briar Rose.

Set in a lush world inspired by beloved fairytales, The Bone Spindle is a fast-paced young adult fantasy full of adventure, romance, found family, and snark.

THE BONE SPINDLE by Leslie Vedder

THE BONE SPINDLE is a product of my love for fantasy books and fairytale retellings, but also of my love for action movies like Indiana Jones and fun, larger-than-life characters. The first real spark was the idea of a book starring two girls as reluctant partners: one who gets to be brilliant and solve problems with her wits and knowledge, and the other a kickass warrior with a devil-may-care attitude and a tendency to put her fist through things. That unlikely friendship became the heart of THE BONE SPINDLE. This book is everything I love in girl adventurers and heroes!

Shane was definitely the most fun to write! She is my answer to What if Xena, but YA and queer. She’s an ax-wielding mercenary who’s a bad gambler and a rowdy drunk and fiercely loyal to her friends—especially her treasure hunting partner!

One of my editors described Shane as having a lot of “general stompiness,” and I laughed so hard. I also knew I had found someone who understood Shane perfectly!

I really loved writing the actual treasure hunting and ruin-adventuring scenes. They gave me a chance to create mysterious, dark, atmospheric places and combine them with action and danger. Plus, Fi and Shane are definitely the type to face their deaths still bickering and trying to get the last word in!

This is going to sound a little depressing, but stick with me! One thing I learned is that you’re never going to stop facing rejection. When I was starting out, rejections really hit me hard, and I dreamed of the day when I’d never have to face them ever again. But as it turns out, even after you get an agent, you can still be rejected by publishers. And even when your book is coming out, it can still be rejected for awards and lists, and even by readers themselves.

But here’s the really freeing part: no rejection is ever the end. As long as you still have the desire to keep writing, you will always have another chance. (And maybe that will help the rejection sting a little less!)

I fell in love with this cover from the moment I saw the first sketch! The artist is Fernanda Suarez, and she brought my treasure hunting girls to life more brilliantly than I ever imagined! Shane and her ax are so fierce! And when you zoom in, you can even see Fi’s smattering of freckles!

One of my favorite books was FLAMEFALL by Rosaria Munda. It’s the sequel to FIREBORNE, and one of the best series I have ever read! Loosely inspired by Plato’s The Republic, the series follows a group of young dragon riders who start out in competition for the prestigious position of Firstrider and then get swept into an epic story of war, friendship, and love.

Rosaria is such an amazing writer, and these books will blow your mind with how brilliant and gripping and intense they are. Best of all, the final book of the trilogy is coming out in 2022!

The Bone Spindle is a trilogy, so I’m currently working on book two. I have especially enjoyed the chance to bring in even more fairytale elements, including uncovering—treasure hunter style, of course!—the true origins and identity of the evil witch who cursed Briar Rose’s kingdom.

Without giving too much away, there’s a scene in the book where one of the girls, Fi, is forced to grapple with a dark figure from her past. It’s a really emotional moment, where she’s reliving this painful memory and agonizing over what she saw in this person who turned out to be so selfish and cruel. It felt like a moment Fi herself wanted to run from, so it was hard to stay in that scene and really dig into everything she was feeling. But the reward was a chance to get at one of those really deep character moments—plus a fun and wonderful partner interaction at the end, where Shane comes through for her in a big way!

You are here: Author Chat with Leslie Vedder (The Bone Spindle)!