Today we are chatting with Kristina Forest, author of ZYLA & KAI

Kristina Forest is an author of romance books for young adults. Her novels include I Wanna Be Where You Are, Now That I’ve Found You and Zyla & Kai. She earned her MFA in Creative Writing at The New School, and she can often be found rearranging her bookshelf.

About the Book: Zyla & Kai 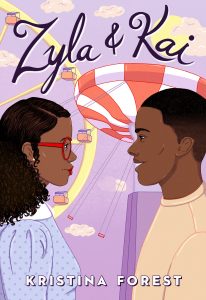 A fresh love story about the will they, won’t they—and why can’t they—of first love.

While on a school trip to the Poconos Mountains (in the middle of a storm) high school seniors, Zyla Matthews and Kai Johnson, run away together leaving their friends and family confused. As far as everyone knows, Zyla and Kai have been broken up for months. And honestly? Their break up hadn’t surprised anyone. Zyla and Kai met while working together at an amusement park the previous summer, and they couldn’t have been more different.

Zyla was a cynic about love. She’d witnessed the dissolution of her parents’ marriage early in life, and it left an indelible impression. Her only aim was graduating and going to fashion school abroad. Until she met Kai.

Kai was a serial dater and a hopeless romantic. He’d put a temporary pause on his dating life before senior year to focus on school and getting into his dream HBCU. Until he met Zyla.

Alternating between the past and present, we see the love story unfold from Zyla’s and Kai’s perspectives: how they first became the unlikeliest of friends over the summer, how they fell in love during the school year, and why they ultimately broke up… Or did they?

Romantic, heart-stirring, and a little mysterious, Zyla & Kai will keep readers guessing until the last chapter.

It would be a tie between Zyla and Kai, but I feel like that answer is kind of obvious since they’re the titular characters. So I’ll say that my favorite side character is Zyla’s best friend, Beatrice, who is unapologetically herself. She’s confident and funny and a very good friend.

You can’t force a book. Sometimes ideas need to marinate and be put aside. Forcing a book to come together is one of the most miserable experiences lol.

I like that the illustrator, Adriana Bellet, brought Zyla and Kai to life exactly the way I pictured them. A lot of what I love is in the small details. Like Zyla’s hair style and her septum nose ring, and the way that Kai is smiling, but Zyla isn’t.

Confessions of An Alleged Good Girl by Joya Goffney

Next is my adult romance debut, The Neighbor Favor, will publish next Spring and I’ll start working on my next YA soon.

The breakup scene (this is not a spoiler–the plot description tells you that Zyla and Kai break up at some point) because emotions are high and everyone is hurting! But honestly, those scenes are also a little fun to write too.

Kai didn’t give me any trouble but writing his scenes with his therapist took the most time because I wanted to make sure that their conversations came across as realistic.

That true love exists and the only people who really know what goes on in a relationship are the ones who are in it.

1 thought on “Author Chat with Kristina Forest (ZYLA & KAI), Plus Giveaway! ~ US Only”

You are here: Author Chat with Kristina Forest (ZYLA & KAI), Plus Giveaway! ~ US Only