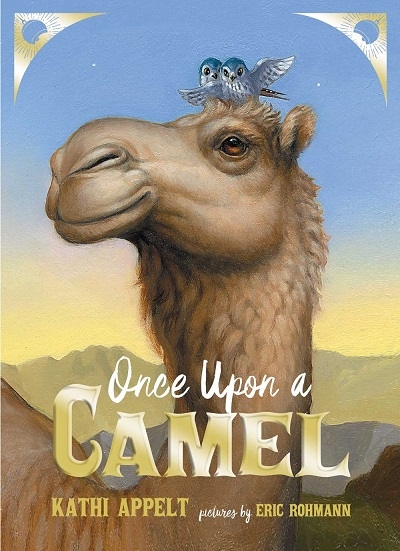 Today we are chatting with Kathi Appelt, author of

Once Upon A Camel!

Read on for more about Kathi and her book!

I was born on July 6, 1954, in Fayetteville, North Carolina. My father, Bill Cowgill, was stationed in the Army there, a member of the 82nd Airborne. He and my mother, Patricia, were both still teenagers when I made my fortuitous appearance. By fortuitous I mean that I couldn’t wait to get to the hospital and was born instead in the front seat of my father’s Ford. Waiting is still not my strong suit!

We only lived in North Carolina for a short time and then moved to El Paso, TX, and finally to Houston. Both of my younger sisters, Patti and B.J., were born there, and Houston is where we grew up.

In our house on Mayo Avenue, we had a garage with unfinished sheetrock on the inside walls. On one side of the garage was my dad’s workbench where he kept all his tools. But the other side was just a big blank wall. My mother divided it into three sections. As soon as my sisters and I could hold crayons, we were allowed to express ourselves on that wall in any color or form that we wished.

If you stood back and looked at the wall, it was like a record of my growing up. Down at the bottom was just a lot of scribbling, but as I grew, the drawing took on new and clearer forms. You could tell the drawings that were done when I was happy from the ones I did when I was sad or angry. The garage wall was a perfect place for expression. Once I started actually writing, on paper, I no longer needed the wall. But I still think of it as the place where my earliest writing took place. It was like my first journal, a record of my feelings and experiences.

I still keep a journal. Like the garage wall, it’s a place for catching all my thoughts, and sometimes my dreams. It’s often the first place that the idea for a new story or poem occurs. Because I don’t have any particular rules about writing in my journal, sometimes I’m surprised by what shows up!

Most of my books and poems come directly from my own life because that’s what I know best and feel most strongly about.

I used to think that a real writer had to have lots of exciting, maybe even dangerous, adventures in order to have something meaningful to write about. Now I know that the best writing is about the people, places, pets, and objects that surround us and that we meet every day. I’ve discovered that writing about them is the absolute best way to really know them and in the process to come to know ourselves a little better. I now know that writing is really a way of seeing. I’d like to encourage you to get out your old journal or start a new one and see what shows up.

Even better, find a bare garage wall and go for it.

Meet Once Upon A Camel!

An old camel is out to save two baby kestrel chicks during a massive storm in the Texas desert.

Zada is a camel with a treasure trove of stories to tell. She’s won camel races for the royal Pasha of Smyrna, crossed treacherous oceans to new land, led army missions with her best camel friend by her side, and outsmarted a far too pompous mountain lion.

But those stories were from before. Now, Zada wanders the desert as the last camel in Texas. But she’s not alone. Two tiny kestrel chicks are nestled in the fluff of fur between her ears—kee-killy-keeing for their missing parents—and a dust storm the size of a mountain is taking Zada on one more grand adventure. And it could lead to this achy old camel’s most brilliant story yet.

When I was quite young, my grandfather told me that there were wild camels in West Texas. Of course, I believed him because he was my grandfather, and as far as I knew he had never lied to me. So, whenever I went through West Texas, I kept an eye out for them. But why there might be wild camels in West Texas was never exactly clear to me. Then, some years ago, I stumbled over an article about a little-known event in the history of the US Army which involved the importation of camels to North America. It was an experiment to see if the camels could successfully traverse the rugged deserts and mountains between what is now Texas and California.

Aha! My grandfather was right!

Then, late in 2019 my husband and I took a road trip to Big Bend National Park. The Army camels would have traveled the same route we were driving on. I felt inspired to consider their story. And just as I embarked upon the writing part of it, the pandemic hit. Seeking shelter became one of the central themes of the book. But more importantly, I worked to find whatever joy could arise from such a dire situation. Finding the balance between the darkness and the light allowed me to focus on the story itself, especially in the face of so much grim news. I really believe that stories save us, and I hung on to that premise as I wrote.

Hooves down, it’s the old camel, Zada. She’s named for Scheherazade, the most famous story-teller of all time. She’s also, like me, a senior citizen. Both of us have creaky knees.

The title came about half-way through the writing. For a while I just called it “Zada.” But that was too limiting.

I love the scene on the ship, the USS Supply. It was based largely on the true story of how the camels were transported from the Mediterranean and Aegean Seas to the coast of Texas. The journey was hampered by raging storms, and it was long—about three months. But the Army did some ingenious engineering to keep the camels safe and they arrived in a small town called Indianola in fairly good shape considering the treacherousness of their passage.

I love everything about it.

A Sitting in St. James by Rita Williams-Garcia. I’ve already read it, and wow, it’s mind-bending, beautiful, tragic, redeeming. All the things.

I think it’s probably The Murmur of Bees by Sofía Segovia, translated by Simon Bruni.

Oh how I wish I knew!

Near the end of the book, I had to write a goodbye scene between Zada and her best friend Asiye. Goodbyes are always hard, but this one surprised me with its poignancy.

Once Upon A Camel

You are here: Author Chat with Kathi Appelt (Once Upon A Camel)!