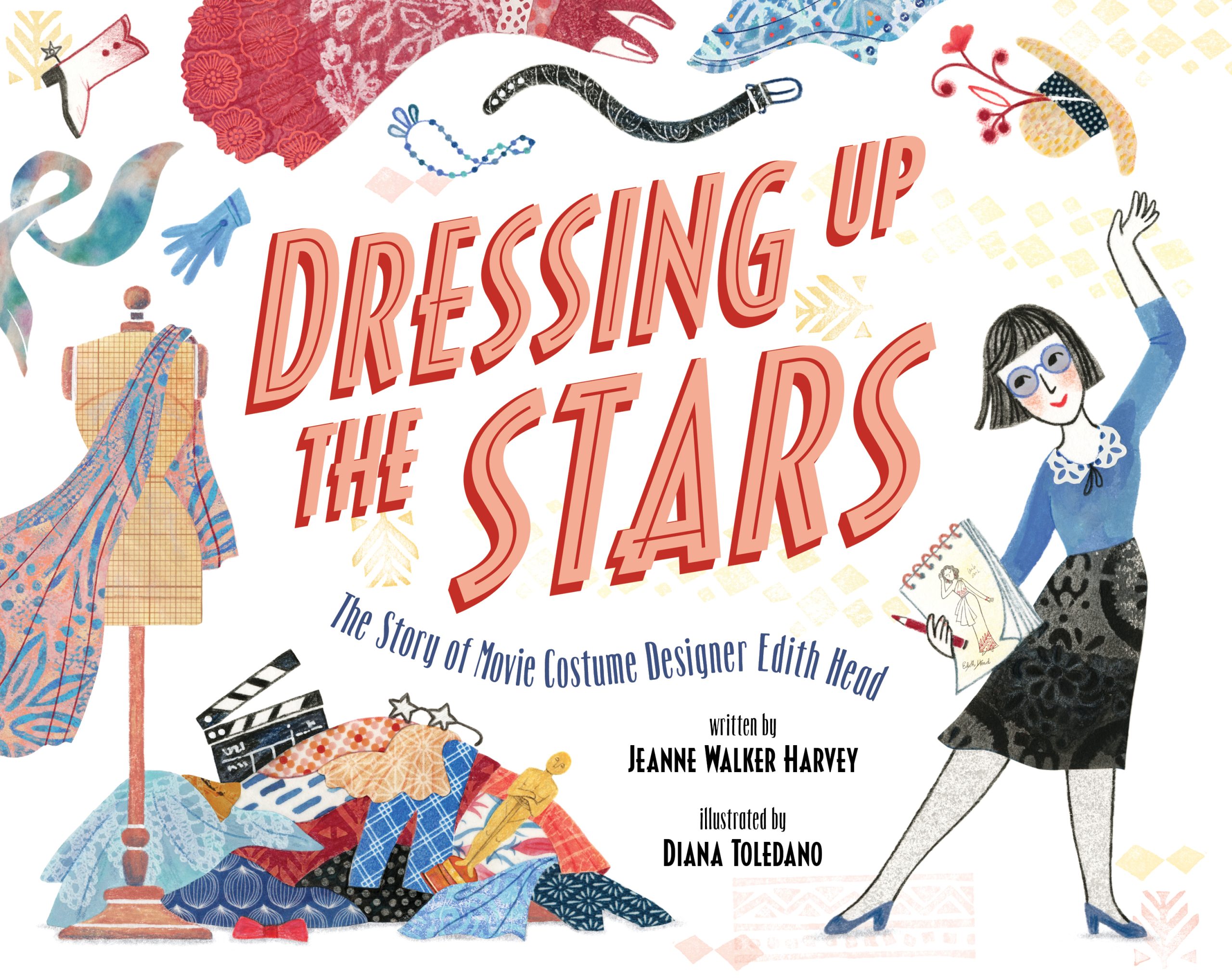 Today we are chatting with Jeanne Walker Harvey, author of Dressing up the Stars 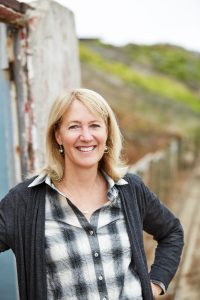 Jeanne Walker Harvey studied literature and psychology at Stanford University and has worn many job hats, ranging from being a roller coaster ride operator to an attorney, a middle school language arts teacher, and a long-time docent for school groups at the San Francisco Museum of Modern Art. She is the author of several books for young readers, including the picture book biographies Dressing up the Stars: The Story of Movie Costume Designer Edith Head, Ablaze with Color: A Story of Painter Alma Thomas, and Maya Lin: Artist-Architect of Light and Lines. Jeanne lives in Northern California. Visit her online at JeanneHarvey.com.

About the Book: Dressing up the Stars 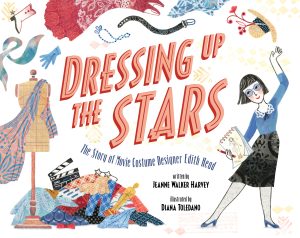 Discover the true story of how a shy miner’s daughter became one of the most legendary costume designers in Hollywood in this inspiring nonfiction picture book biography.

As a child in the small mining town of Searchlight, Nevada, Edith Head had few friends and spent most of her time dressing up her toys and pets and even wild animals using fabric scraps. She always knew she wanted to move somewhere full of people and excitement. She set her sights on Hollywood and talked her way into a job sketching costumes for a movie studio.
Did she know how to draw or sew costumes? No. But that didn’t stop her!
Edith taught herself and tirelessly worked her way up until she was dressing some of the biggest stars of the day, from Audrey Hepburn to Grace Kelly to Ginger Rogers. She became the first woman to head a major Hollywood movie studio costume department and went on to win eight Academy Awards for best costume design—and she defined the style of an era.

YABC: What gave you the inspiration to write Dressing Up the Stars?

I love that question – it’s one I’m always asking other authors. But first of all, I want to thank Young Adult Books Central for this opportunity to talk about our new book, Dressing Up the Stars – The Story of Movie Costume Designer Edith Head. This book came about because I’ve always been a huge Edith Head fan. Growing up in Southern California, I watched the Academy Awards on TV that were being filmed in nearby Hollywood. My mom and I would search the red carpet for a glimpse of Edith Head with her round dark glasses, blunt haircut and fashionable gowns she designed for herself. And because I enjoy watching classic movies, I always look to see if Edith Head is the costume designer for the movie. When I started researching Edith for the possibility of a children’s book, I was fascinated to learn that she had grown up in a mining camp outside of Searchlight, Nevada. Without siblings or friends nearby, she used her imagination when she was lonely. She not only dressed up her pets, but also desert animals and even cactus— glimmerings of her future life as a costume designer. And you can imagine what a pleasure it was to research this book. I relished watching movies for which she designed costumes, and examining her costume drawing.

YABC: Which came first, the title or the book?

For me, the final title always comes last. Often the wording of the title is inspired by a theme or idea in the final version of the text. For example, for this book, I enjoyed pursuing the double meanings of the words “stars” and “searchlight”– – the shining stars in the sky above the town Searchlight, Nevada where she lived as a child, and then the movie stars appearing under search lights for movie openings in Hollywood where Edith Head became a successful costume designer. But I still need a title when I begin to draft a story because the title leads me to find the focus, the throughline, of the story. The working title of this book was “Queen of Dress Up” which derived from a quote by the actress Bette Davis who said that Edith was “the queen of her profession. She will never be replaced.” Not as good of a title, but it helped me to begin writing.

YABC: What scene in Dressing Up the Stars you most proud of, and why?

I’d say I’m proud of the book as a whole, but I think I personally connect to an early scene which reads “To feel less lonely, Edith often hosted make–believe parties for pretend guests, and gave tea parties for animal friends.” I was essentially an only child because my siblings were much older and out of the house when I was young. I often played by myself and read library books constantly. And sometimes I too was lonely. I also hosted a pretend tea party while hidden away under my grandmother’s weeping willow tree. I didn’t have the array of real animals as Edith did, but I did set up my stuffed animals. And my grandmother let me use her lovely china tea cups. I think I also like those early childhood scenes in Dressing Up the Stars because I think there’s so much value in unstructured quiet time for children to explore their worlds of imagination.

Write about what truly ignites your passion! For me, the combination of writing about creative people, especially artists, for children fits me perfectly because I love art and design and sharing that interest with children. I’ve been a long-time docent at the San Francisco Museum of Art (AFMOMA) for school groups, and it’s always such a thrill introducing the museum to children who have never visited a contemporary art museum before. And in writing my books, I savor the research (visiting museums, reading, and gathering more notes than I’ll ever be able to use). And then I enjoy solving the puzzle of how to craft what I hope will be a compelling story for children about a creative person in a picture book format.

I’m excited to be working on another picture about biography about an artist, a woman who was part of a major scientific discovery but was not in the limelight. Stay tuned for more information when the book deal can be announced.

YABC: What is the main message or lesson you would like your reader to remember from Dressing Up the Stars?

I hope that young readers are inspired, as I am, by Edith Head’s perseverance in pursuing her career as a costume designer. She definitely had an abundance of talent, but she also needed to navigate within a major Hollywood movie studio costume department to become the first woman to head such a department. And she was willing to fail and try again. And it’s quite amazing that Edith won eight Academy Awards for Best Costume Design, which is more than any female has ever received.

What a fun question! I don’t know if it’s a superpower, but I would say I am pretty resourceful at finding hidden treasure. Whenever I pursue writing about a topic, particularly interesting creative people, I’m always on the lookout for valuable pieces of information about them, much like jewels in a treasure box. I find these treasures while researching primary sources, such as interviews, autobiographies, diaries, and letters. For example, for my Edith Head book, I was excited to read in her autobiography, called The Dress Doctor, that as a girl living in the Mohave Desert, she dressed up her pets and desert animals and even cactus. I always think it’s fascinating to see glimmerings in a person’s childhood of their later talents and pursuits. And the Library of Congress is one of my favorite sources of information as there is such a wealth of information there, not only on its website but through the ideas provided by the librarians who are so generous with their time and expertise.

Yes! I want to credit the talented Diana Toledano for her amazing illustrations in the book. For a picture book, the illustrations and text in a picture book are of equal importance. I think Diana’s illustrations for Dressing Up the Stars perfectly capture Edith as a young girl in the desert, but also as a successful costume designer in Hollywood and her life in between. I so enjoy looking at all the details, textures and patterns that she has added to the drawings. And there are many fun details, such as the line of ants leading up to Edith’s desert picnics with her animals and the tiny Hollywood sign on the hills behind the Academy Award ceremony venue. It was such a fun surprise to see on the page showing the streets of Los Angeles that Diana included a store sign entitled “JEANNE RADIO”. And, of course, a book isn’t created just by an author and illustrator. There’s a whole team of talented and dedicated people behind it. I’d like to share my heartfelt thanks to my amazing agent, Deborah Warren of East West Literary Agency, my wonderful editor, Andrea Welch at Beach Lane books, the whole team at Simon & Schuster (including Alex Kelleher-Nagorski, Associate Director, Publicity, who helps connect me to interviews such as this one), and my superb publicists, Sarah Shealy and Barbara Fisch of Blue Slip Media. It definitely takes a village to create a book, and I feel so lucky to be working with such a group.

Many thanks again for this opportunity! I really enjoyed our discussion. I hope your readers enjoy hearing the background of our book, Dressing Up the Stars – The Story of Movie Costume Designer Edith Head.

Title: Dressing Up The Stars

Three (3)  winners will receive a paperback copy of Dressing up the Stars (Jeanne Walker Harvey) ~US ONLY (No P.O Boxes)!

4 thoughts on “Author Chat With Jeanne Walker Harvey (Dressing up the Stars), Plus Giveaway! ~US ONLY (No P.O Boxes)”

Run for Your Life
Poo in the Zoo: The Island of Dinosaur Poo
Noisy ABC
The Moonlight Zoo
Elephants Remember: A True Story
Little Hearts: Finding Hearts in Nature
Albie on His Way
A Cruel and Fated Light
Breakfast Buddies
Down in the Dumps: The Mystery Box
Down in the Dumps: Trash vs. Trucks
Down in the Dumps: A Very Trashy Christmas
Jingle the Christmas Clown
Map of Flames (The Forgotten Five #1)
Reindeer in Here: A Christmas Friend
I'm a Little Snowman
Santa Mouse Bakes Christmas Cookies (A Santa Mouse Book)
A Very CoComelon Christmas!
Happy All-idays!
The Love Match
The Magic Pencil
Leo's Lavender Skirt
Feminist Kids
Be Careful, Bruno!
A Rock in the Ocean
Skyriders
When You Wish Upon a Lantern
Keyana Loves Her Family
How Many Squirrels Are in the World?
Dreams of Song Times

You are here: Author Chat With Jeanne Walker Harvey (Dressing up the Stars), Plus Giveaway! ~US ONLY (No P.O Boxes)