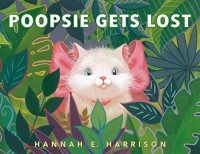 Today we are chatting with Hannah E. Harrison (POOPSIE GETS LOST) 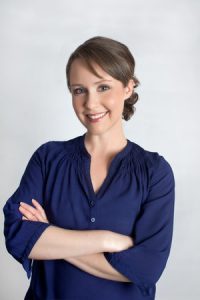 Hannah Harrison is an award-winning illustrator whose first book, Extraordinary Jane, received three starred reviews and was a Kirkus Reviews Best Book of the Year. She lives with her family in Oklahoma.

About the Book: Poopsie Gets Lost

A fluffy, nap-loving cat goes on the (fur-raising!) outing of a lifetime in this funny and gorgeously illustrated adventure about finding your inner tough kitty.

Poopsie the cat spends her days licking her paws and rubbing her ears and looking fluffy, until the pushy narrator of this story pressures her to do something a little less boring. Adventure is waiting, after all! So off Poopsie goes, out the cat door, across the lawn, and . . . through a gate covered in Danger signs. Soon Poopsie is lost in a jungle full of menace, from a vine that’s actually a snake to a crew of tigers to a river full of crocodiles! All the while the narrator keeps pushing her to keep going. Will fluffy little Poopsie make it out of the jungle in one piece?

One morning my daughters pointed out to me that our cat, Peppercorn, was lurking behind a potted palm plant in the corner of the room. I chuckled and said “Blobby in the jungle” (“Blobby” is her nickname because she likes to loaf around the house like a blob). Anyway, the whole thing got me thinking, What would happen if a pampered housecat suddenly found herself in the middle of the jungle? and it sort of went from there.

Poopsie! I can relate to her on so many levels it’s not even funny. I’ve listened to the wrong people, trusted in the wrong things, gone out of bounds, ignored my better instincts, caved to peer pressure, gotten lost, felt defeated, nearly drowned…but the one good thing about the inevitable failure is that it points you back to the truth, and once you see the truth it makes you stronger. Poopsie is one tough kitty by the end…and, hopefully, much wiser.

I’m going to have to say the page after Poopsie goes over the waterfall. Following the narrator’s bad advice has brought Poopsie nothing but trouble, and this is the page where she decides she has finally had enough. It’s her all-time low—she’s drenched, lost, exhausted, humiliated, and fed up. I was so nervous about painting these spot illustrations. I wasn’t sure how I was going to paint the water, or how I was going to make Poopsie look soaking wet, or the waterfall look sufficiently splashy. And on top of all that, it was such an emotional turning point for Poopsie, that I had the added pressure of needing her expressions just right. Let’s just say that, all things considered, I’m relieved it came out as good as it did!

Probably to not cling so tightly to one idea. Way back at the beginning I had a picture book that I was trying to get published. It was the first picture book manuscript I had ever really attempted. I liked the book. A smattering of family and friends liked the book. The editors? They liked it, too…they just didn’t love it; it wasn’t special enough. But I convinced myself that it was their loss, and kept sending it out. Did I write other manuscripts in the meantime? No. Did I make any significant changes or improvements to the manuscript? Nope. Instead, I thought it would be fun to dig in my heels and keep beating a mediocre dead horse…for YEARS! I wasted so much time—time that I could have spent brainstorming, trying out new ideas, and improving my craft. Thankfully, reality eventually kicked in, and I started writing other stories. It wasn’t until idea number four that I realized I was on to something truly special. Sometimes, you’ve got to just let go, take what you’ve learned, and move on!

Poopsie’s little face! You know, I realized after the fact that Poopsie bears an uncanny resemblance to my youngest daughter when she was a baby—right down to her sweet expression and sticky-uppy hairs. It was completely unintentional, but I guess seeing that adorable little face every day rubbed off on me!

Would it be wrong to say POOPSIE?! I mean between the pandemic, lock-downs, extensions, shipping delays, and two pushed back pub dates, it feels like this book is “The Little Engine That Could” of books! I absolutely cannot wait for POOPSIE to finally get here! She’s been lost for far too long, and I’m just dying to hold an actual book in my hands.

Well, I guess I would have to say Poopsie. She was tricky because she doesn’t talk, so her entire being had to be communicated in illustration only (illustration counts as a form of writing, right?). Great care had to be taken with her expressions and body language in order for her emotions, thoughts, and personality to (hopefully) come across. Of course I suppose the narrator was equally tricky because their entire essence had to be captured in just dialogue…[pauses for reflection]…Nope. Final answer: Poopsie. Poopsie gave me the most trouble.

In summation, this is a book about discernment. We live in a time when we are constantly bombarded with voices telling us what we should need, do, and think, and it seems to me that it’s more important than ever to encourage discernment in our kids so that they aren’t persuaded down the wrong paths. Hopefully Poopsie will remind readers that it’s good to reason for yourself and stand firm.

When the occasion calls for it, I can talk really, really fast. Like Micro-Machine-Man fast. (And I totally just gave away my age with that cultural reference). Not really sure what this particular superpower is useful for—it rarely comes in handy and is only ever-so-slightly amusing. Maybe I could get a job reading disclaimers at the ends of pharmaceutical commercials? Nah. I should probably stick with books.

One winner will receive a copy of Poopsie gets Lost (Hannah E. Harrison) ~ US Only

3 thoughts on “Author Chat with Hannah E. Harrison (POOPSIE GETS LOST), Plus Giveaway! ~US Only”

You are here: Author Chat with Hannah E. Harrison (POOPSIE GETS LOST), Plus Giveaway! ~US Only