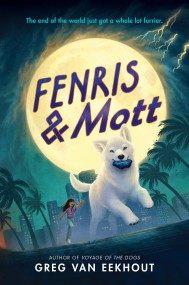 Today we are chatting with Greg Van Eekhout, author of Fenris & Mott 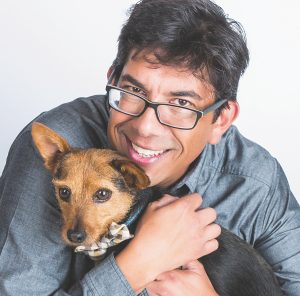 Greg van Eekhout is also the author of Voyage of the Dogs, Cog, and Weird Kid. He lives in San Diego, CA, with his astronomy/physics professor wife and two dogs. He’s worked as an educational software developer, ice cream scooper, part-time college instructor, and telemarketer. Being a writer is the only job he’s ever actually liked. You can find more about Greg at his website: www.writingandsnacks.com.

About the Book: Fenris & Mott

A girl and her puppy face down the end of the world—which the puppy’s partly responsible for—in this middle grade story from acclaimed author Greg van Eekhout, perfect for fans of Gordon Korman and J.C Cervantes.

Mott knows how important it is to keep a promise. So when she finds a puppy abandoned in a recycling bin and promises to keep him safe, she is ready to do everything she can to protect him. What she doesn’t realize, however, is that this is no ordinary puppy. He’s a legendary wolf named Fenris, who’s prophesied to bring about the end of the world by eating the moon. Now Mott has found herself in charge of making sure the hungry pup—who’s busy munching on lampposts, cars, and water towers—doesn’t see all of California as an appetizer, while also hiding him from the Norse gods who are hot on his trail, determined to see the prophecy come true.

Mott vows to protect Fenris, rescue him from his destiny, and prevent the world from ending. But will she be able to keep her promise? Or has she bitten off more than she can chew?

I have a few answers to this question! First, I’ve always been interested in Norse mythology. It’s all about doom and lava and ice and swords and characters who are bigger than life but still very relatable. Second, I wanted to write a story about a chaotic and destructive dog. That’s Fenris – not a dog but a wolf, actually – and when we meet him in the book he’s still tiny and cute but already frighteningly powerful. Third, I wanted to write a story about promises – the promises we make, the promises we break, the promises made to us that others break, and the promises that are impossible to keep. Mott promises to protect Fenris at all costs before finding out that Fenris is destined to destroy the universe. Can she keep this costly promise? And fourth, I wanted to write something that grapples with one, if not the, most critical problems we face —  human-caused climate disaster.

I came to love Thrudi the Valkyrie warrior. She’s courageous, capable and weird.

I don’t want to give spoilers, but Mott has a scene at the end where she asserts her strength while the world is literally burning around her. I’m not necessarily proud of my writing, but I’m proud of Mott.

We writers spend so much time worrying about the outcomes of the process: publishing, sales, marketing, all the things over which we have the least control. What I’m trying to teach myself is to keep a laser focus on the part over which I do have utter and complete control: writing.

I love absolutely everything about it! Fenris running through chaos! Mott in pursuit! Dark and stormy Los Angeles skies! That huge moon! The artist is Vivienne To and the designer is Chris Kwon, and they absolutely smashed it. And the book has a wrap-around cover with a giant Fenris eating a truck and I love it even more than the front cover if that’s even possible.

EVERY BIRD A PRINCE by Jenn Reese. It seamlessly combines fantasy with questions about identity and societal expectation.

Another middle-grade book! It’s about ghosts who pull heists and it should be out in fall 2023 if all goes according to plan.

4 thoughts on “Author Chat with Greg Van Eekhout (Fenris & Mott), Plus Giveaway! ~ US ONLY”

You are here: Author Chat with Greg Van Eekhout (Fenris & Mott), Plus Giveaway! ~ US ONLY