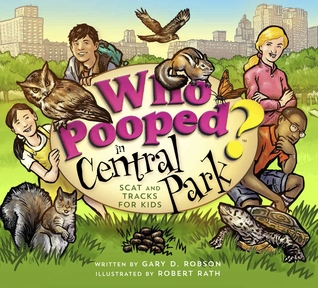 author of Who Pooped in Central Park!

Below you’ll find more about Gary and his book!

YABC:   How did you come up with the “Who Pooped” series?

My kids actually came up with the idea. A bunch of hay on the ranch had been torn up, and they asked if the cows did it. I showed them a pile of deer poop and explained that it must have been deer. They said that’s what I should write my next book about. I originally pitched it to publishers as “Who Pooped on the Ranch?,” which didn’t sell. The acquisitions editor at Farcountry suggested moving it to Yellowstone Park, and that’s how the series began.

YABC:   What inspired the newest installment, Who Pooped in Central Park?

Central Park is a whole different world from the big backcountry parks. It seemed like a fun and different book to write, focusing on animals in a more urban setting. There are city kids that can’t really relate to the wilderness, but they can connect with dogs, hawks, squirrels, and pigeons!

YABC:   Do you have any future locations planned?

The next one isn’t firm yet. Each book is a negotiation. There are parks I want to do like Denali in Alaska that really can’t generate enough sales to make it worthwhile for the publisher. We’re looking at some possibilities in the Eastern U.S. now.

YABC:   What will children learn from the “Who Pooped” series?

My goal with the series: catch the kids’ attention with the title, tell them a story, and when they least expect it, teach them something. The biggest lesson I want to impart is that the animals are there even if we don’t see them, and if we learn to look for scat and tracks, we’ll know what critters have passed through.

YABC:   Why is important for children to learn about animal scat and tracks?

Society tells us that poop is nasty and gross. In reality, though, it’s an important tool for naturalists and other scientists to use in studying animals. If you want to know what a bear eats, you can get a lot more information—and stay a lot safer—by collecting scat samples than by following bears around and watching them eat. Most National Park visitors will never see a mountain lion or a wolverine, but if you learn to identify tracks, you just might figure out where they’ve been.

YABC:   Have you visited every park in the series?

Almost. Between my writing and managing a bookstore, my travel time gets limited. I hope to fill in the last gaps soon, though.

You’ve written children’s books, technical books, historical fiction, and even a textbook. Do you have a favorite genre to write?

I love telling stories, and I love teaching. All of my books bring those two things together, no matter what the genre. I don’t like being put in a pigeonhole. I like being able to do something new and different with each book.

That said, I really do love writing children’s books. So far, everything I’ve written for kids has been in the picture book genre. I’m looking at a couple of ideas for chapter books, too.

Meet Who Pooped in Central Park! Who Pooped in Central Park? (the 20th book in the Who Pooped in the Park? series) follows four children as they wander through New York City’s Central Park, learning about the animals from the poop they’ve left behind.

Gary’s Guide to Successful Book Signings will walk you through your launch party, book signings, talks, panel discussions, and conventions. It covers everything from the basics (how do you sign a book?) to the advanced (what should be in your exhibitor kit at a book show?) replete with tips, tricks, sample signatures, photos of actual signings, and anecdotes.

Although I’m best known for my children’s nature books, I began in the computer and electronics world. I’ve written technical books, historical fiction, a college textbook about closed captioning, and more.

In addition to over two dozen books, my list of publications includes technical manuals and hundreds of articles for magazines, newspapers, encyclopedias, and Web sites. I’ve written for a wide variety of publications, from the World Book Encyclopedia to Renaissancemagazine, on subjects ranging from cattle to computer hacking.

As of summer 2016, I am also the General Manager/CEO of This House of Books, a community-owned bookstore in Billings, Montana.

Who Pooped In Central Park

You are here: Author Chat with Gary D Robson, author of Who Pooped In Central Park!!