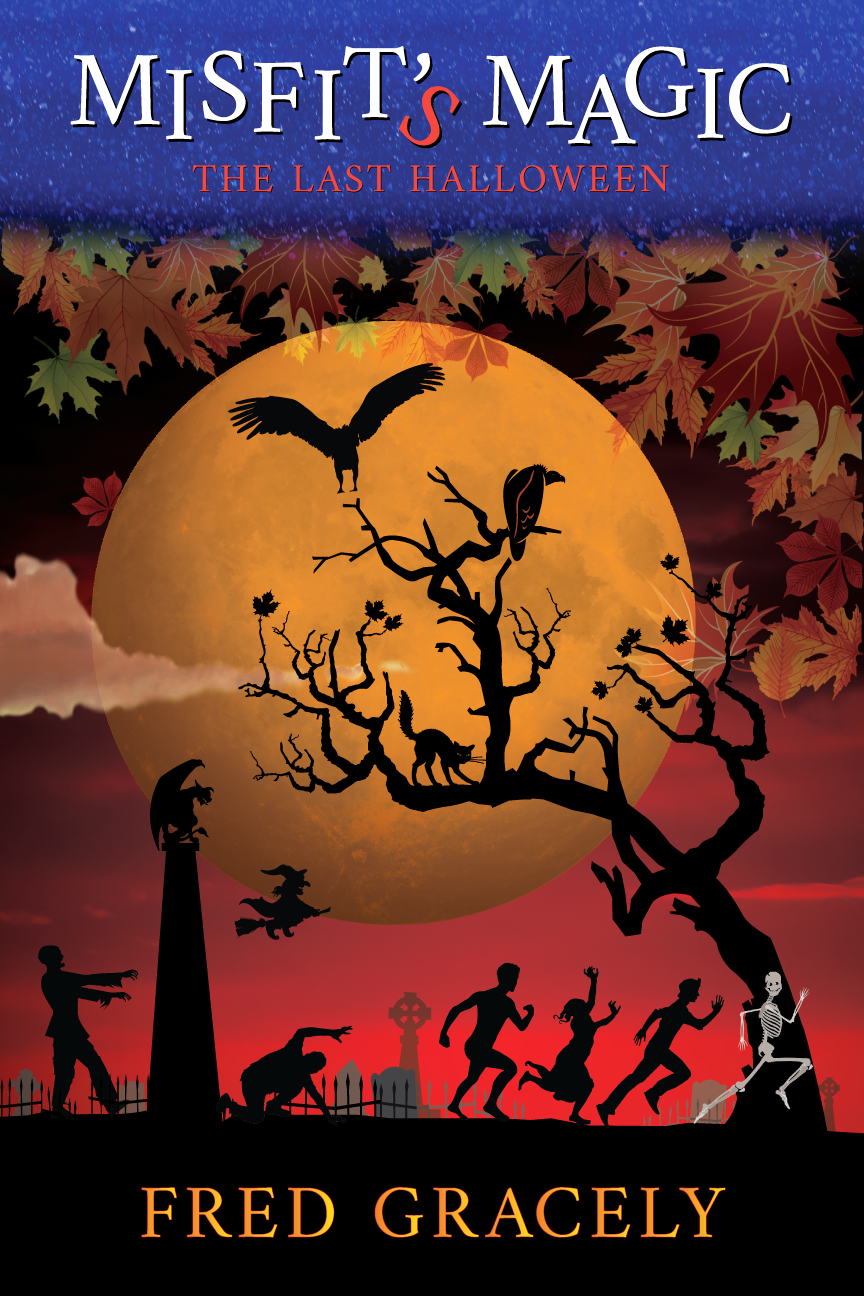 Today we are chatting with Fred Gracely, author of Misfit’s Magic: The Last Halloween! 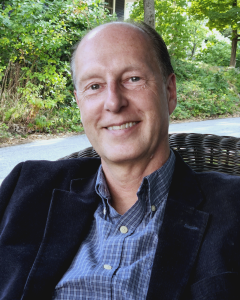 FRED GRACELY grew up in Pennsylvania and now resides just outside Boston, Massachusetts. After attending six different colleges and studying many subjects (art, electronics, computer science, psychology), he earned a B.S. in Psychology from Framingham State University and, later in life, an M.A. in Human Relations, Specializing in Holistic Counseling Psychology from Lesley University (psychology is one of my passions).

He discovered his love for writing and storytelling as he read books to his children. On a whim, he started making up stories to tell them. They enjoyed them so much that he began to write them down. Now, there is little he loves as much as sitting down to craft language and bring characters and stories to life.

About the Book: Misfit’s Magic: The Last Halloween 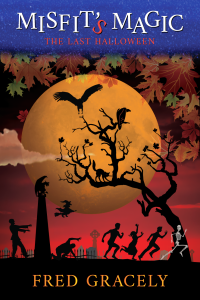 When the world’s balance of magical power takes a sudden nasty turn, a lonely 13-year-old orphan boy named Goff, who knows nothing about magic, is called upon to save Spraksville, the town he’s been desperately trying to escape.

When the stone gargoyles in Spraksville start talking to him, he discovers that ending up there wasn’t accidental. Thirteen generations ago, Goff’s ancestor stopped a dark wizard from performing an ancient ritual to become invincible. Now, due to magical laws, Goff must stop the present-day counterpart from performing the same ritual in Spraksville on Halloween night.

It’s a deadly, winner-take-all battle to save the world where one side has prepared for centuries, and the other doesn’t have a clue. The stakes couldn’t be higher, and for Goff, the odds any worse – he must rely on his wits, a little luck, and help from a ragtag group of new friends.

I had read many fantasy / horror / young adult novels, and I felt a bit of a formula developing: an underdog discovers that they are special and then does special things. I wanted to write a story about a boy who is not special in any way (in fact, he’s been conspired against for thirteen generations to ensure that). Yet, he is inherently special in a subtle way: genuinely caring, thoughtful, and sincere. Rather than discovering that he is the descendent of a line of powerful wizards and can shoot lightning bolts out of his fingers, he finds his way through the adventure being himself (although he does discover he has some “natural magic”) and making friends and caring about people.

Well, it should be Goff since he is pretty much me as a boy, but Halstrom was so fun to write! His deadpan, overly logical, stoic nature is so fun sometimes. I honestly don’t know how I created him. One day, I just started writing dialog for this tall, robotic boy with dark skin and a deadpan speech style (with a bit of a Slavic accent — odd pairing, I know, but that’s what popped into my mind). I loved him and his intelligence and style so much that I made him one of the key characters in the ensemble of this book.

This book has gone through many revisions and titles as I reworked it to meet my theoretical conception of a well-crafted story. I like to think of a story as a “grand argument” in that logic, reason, emotionality, and opposition all have unique and explicit representations. I also like multiple throughlines and arcs (action, growth, relational, situational, etc.). The first title was Night of the Nids (“nid” was the original name for Nexi). I like this title, but I worry that people will think it’s a book “about” Halloween. It’s not. It just has a lot of Halloween and Fall imagery and takes place during that time of the year.

FG: Well, I can’t describe my favorites scenes later in the book without it being a spoiler, but early on in the book, there is a scene where Goff first meets Halstrom and Lydia at Deadman’s Pond by happenstance, and I am proud of the way that scene gets the reader to know them through action and fun bantering.

FG: To close my eyes and imagine I’m seeing the scene I’m writing as a scene in an excellent movie. Then I try to paint that in words, culling out the most essential details that establish the space’s character and keeping the scene’s feeling in mind as I write the interactions. Another thing I’ve learned is not to spend time on detailed outlines. When I write, I find that ideas pop into my head about directions to take the book, and that’s where I think the best ideas come from. Typically, I’ll pay attention to the direction my characters want to go, and they usually have brilliant ideas.

FG: This book kind of defies the standard genre categorization. It’s whimsical and humorous but not a comedy per se. It’s got horror elements in it, but it’s not a horror story (I don’t actually like classic horror). It has many traditional fantasy elements (magic, wizards, magical creatures, etc.) but it’s not strictly a fantasy. And, the protagonists are all young teens, but it’s not really a young adult novel. So, what I like about the cover is that it conveys all of that graphically. My favorite touch is the image of Bones (the chatty, re-animated skeleton) running off the bottom corner.

I’m working on the sequel to Misfit’s Magic: The Last Halloween. The working title is “Shades of Winter,” but I haven’t decided if I like that enough. We’ll see. I also have another book that I’ve finished and am working on polishing. It’s called The Orb: Moon Spirits. It’s about a boy with no identity who must unravel his past to save the future. It takes place both in ancient times and current times. Unlike Misfit’s Magic, it is told from four different viewpoints: Sarina (a Moon Spirit), Jexter (a Shadow Spirit), Max (the boy with no identity), and Garook (an evil Moon Spirit). The ensemble is tons of fun, and I love writing them as much as I did Goff, Halstrom, Pam, and Lydia in Misfit’s Magic.

Pam. She goes through a change in identity throughout the book. She has lived under the thumb of her brother, Ben, and his idiotic male friends all her life, treated as “Ben’s female brother.” Pam is tough as nails, but she starts to find that she feels a desire to explore feeling feminine too. So, while I start her out as a bully and keep her strong, I needed to find a line that made it believable when she breaks from Ben’s grip on her and becomes a more rounded character that joins the core ensemble and explores a crush on Halstrom (who is also tough as nails, but robotic in a fun way).

The heart has its own kind of magic. I enjoy and appreciate all human beings’ qualities, so I genuinely show them appreciation and respect. In my experience, being kind to even the grumpiest of people can be very rewarding. There are so many occasions where I’ve extended kindness through curiosity or humor to someone who seemed unpleasant, only to find that breaking the ice revealed a lovely person underneath. We are all human and want to be seen, heard, and appreciated. I try to do my part to offer this to everyone I interact with. So does Goff, the main character in Misfit’s Magic: The Last Halloween, and it’s a fundamental personality trait for him.

7 thoughts on “Author Chat with Fred Gracely (Misfit’s Magic: The Last Halloween), Plus Giveaway! (US/CAN Only)”

You are here: Author Chat with Fred Gracely (Misfit’s Magic: The Last Halloween), Plus Giveaway! (US/CAN Only)