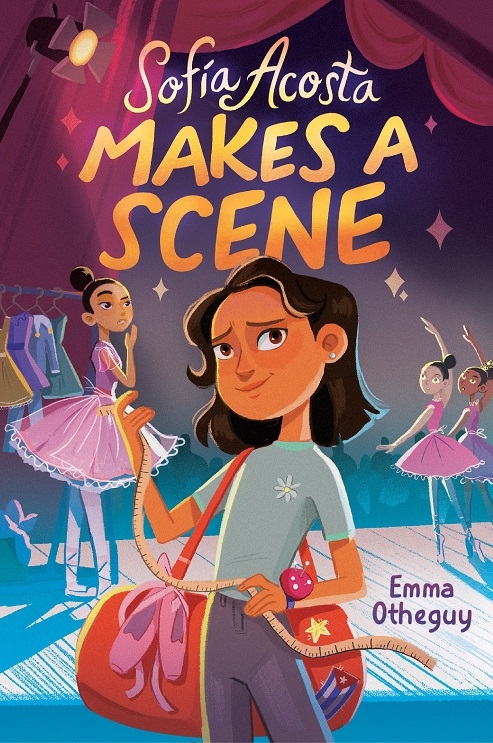 Today we are chatting with Emma Otheguy, author of

Read on for more about Emma, her book and giveaway!

Emma Otheguy is the author of the middle-grade novel Silver Meadows Summer (Knopf, 2019) and the bilingual picture book Martí’s Song for Freedom (Lee & Low, 2017) which received five starred reviews, was named a Best Book of the Year by Kirkus Reviews, School Library Journal, and the New York Public Library. She co-authored The Unicorn Rescue Society: The Madre de Aguas of Cuba with Adam Gidwitz (Dutton 2020), and her most recent publication is her contribution to the new Carmen Sandiego universe, Secrets of the Silver Lion (HMH 2020). Emma holds a Ph.D. in History from New York University, where she focused on colonial Latin America, and graduated from Swarthmore College, sold books at an independent bookstore, and taught elementary-school Spanish. She lives in New York City with her family. Visit her online at emmaotheguy.com.

A poignant, coming of age story about a Cuban-American girl trying to figure out where she belongs–both in her ballet-loving family and the wider world. Perfect for fans of Front Desk and Merci Suárez Changes Gears.

It’s a good thing Sofía Acosta loves dreaming up costumes, because otherwise she’s a ballet disaster–unlike her parents, who danced under prima ballerina Alicia Alonso before immigrating to the suburbs of New York. Luckily, when the Acostas host their dancer friends from Cuba for a special performance with the American Ballet Theatre, Sofía learns there’s more than dance holding her family together. Between swapping stories about Cuba and sharing holiday celebrations, the Acostas have never been more of a team.

Then Sofía finds out about the dancers’ secret plans to defect to the United States, and makes a serious mistake–she confides in her best friend, only to discover that Tricia doesn’t want outsiders moving to their community. Now Sofía wonders what the other neighbors in her tight-knit suburban town really think of immigrant families like hers. Sofía doesn’t want to make a scene, but if she doesn’t speak up, how will she figure out if her family really belongs?

Sofía, of course! She is funny, sweet, and creative, and while she doesn’t start out being outspoken—in fact, when the book begins, she’s a downright people-pleaser—she learns to advocate for the issues she believes in, even when they make people angry. To me, that’s true bravery, especially for a kid.

The title was the last piece of this book to come together, and my agent is the one who came up with it during a conversation with my editor. It’s an absolutely perfect title because it works on two levels. One, Sofía is dancing in Party Scene for her local ballet school’s production of The Nutcracker, and she loves set and costume design—she’s literally helping to make a scene in a show. Two, Sofía is afraid to speak up about issues she cares about because she doesn’t want to upset people or “make a scene.” But in the end, she decides that raising her voice is more important than towing the line, and learns that sometimes, it’s okay to make a scene.

I love Sofía’s dance bag! She’s embellished it with a star, because she loves all things sparkly, and a Cuban flag, because she’s proud of being a Cuban-American. The symbols represent her identity, and that the way they are placed on her bag signals that she is a kid who loves sewing and DIY!

Sofía’s best friend, Tricia was a hard character to write because she is someone who Sofía loves but who has ideas that Sofía finds offensive. Like Sofía, Tricia is Cuban-American, but she doesn’t feel as strongly about her Latina identity as Sofía does, and she is against immigration. Writing Tricia’s ugly ideas was hard because her ideas hurt me. Even as I gave Sofía the chance to stand up and respond to those beliefs, I hated to be reminded that there are people who really hold these troublesome views. I also had to balance those negative traits with making Tricia a character who could believably have been Sofía’s best friend for many years. She couldn’t be a caricature—she had to be a fully developed person with her own strengths, in addition to the antagonistic role she sometimes plays in the story.

I want kids to realize that you’re allowed to make a scene. Or if you’re not allowed, you can do it anyway. Kids intuitively want to please adults by behaving well, but sometimes to stick up for others you have to rock the boat. I believe that kids’ voices matter, and they should use them.

I care a lot about housing, which is an issue that Sofía tackles in the book. When plans to build a new apartment building in Sofía’s towns are announced, some of Sofía’s neighbors are scandalized. They think of their town as a place that should only have houses, and they ignore the reality that by not allowing apartments, they make the community more expensive and exclusive. Their positions are inherently racist and classist. Sofía helps them understand that to make their home a more welcoming and diverse place, more housing is needed. In addition to racial and economic justice, housing has a large impact on climate: when more dense housing is available, people don’t need to spend as much on fuel to heat and cool their homes, and they don’t have to drive as much because people and businesses are closer together. I hope that readers will become interested in this important cause!

Everything worth having takes time, and that is especially true as a writer. There’s a lot of practical advice I could give, from turning off your internet browser, working in focused one-hour intervals, reading lots of craft books—but I wanted to talk about the slowness of the book world, because that’s what most frustrated me when I started. We write because we have a story to share with the world—that we feel we need to share with the world—so it can feel like torture to realize how long it takes to make a book. Many of us are writing stories that we’ve been holding close inside of ourselves for years, maybe a lifetime. By the time we get that story written down, we want it out. We want to shout it from the rooftops. We feel like we’re going to explode. But I’ve learned that the long revision process involved in publishing a book helps ensure that you’ve written the story you wanted to tell, and that it communicates what you really wanted to say. Without that process, it’s easy to fall short without even realizing it. The editor of Sofía Acosta Makes a Scene helped me knit together the two major themes of the book, ballet and immigration, and unearth connections I didn’t even think were there when I first started. I haven’t agreed with every piece of editorial feedback I’ve ever received, but every piece of editorial feedback I’ve received has helped me find holes in my stories I didn’t know were there and led me to understand what was needed to give my words depth and resonance. Every copyedit, proofread, and galley review has unearthed something new. This year marks five years since my first book was published, and more and more, I’m grateful for the process that publishing creates, for how it pumps the brakes when I want to speed ahead. If you can, try not to hate the slowness, and use it to grow.

I have a few new books coming out that will be announced in the next few months. If you’d like to stay in touch, the easiest way is to subscribe to my newsletter at emmaotheguy.com/email.

6 thoughts on “Author Chat with Emma Otheguy (Sofia Acosta Makes A Scene), Plus Giveaway! ~ (US Only)”

You are here: Author Chat with Emma Otheguy (Sofia Acosta Makes A Scene), Plus Giveaway! ~ (US Only)