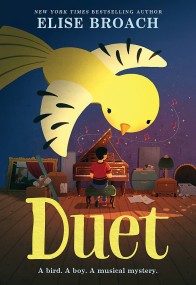 Today we are chatting with Elise Broach, author of Duet 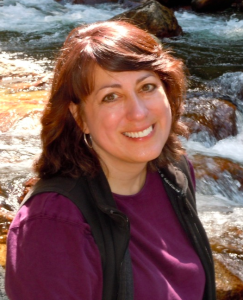 Elise Broach is the New York Times bestselling author of many books for children and young adults, including Masterpiece, Shakespeare’s Secret, The Wolf Keepers, Desert Crossing, the Superstition Mountain trilogy, and the Masterpiece Adventures chapter book series. She lives in Connecticut. Elise invites you to visit her at elisebroach.com.

About the Book: Duet:

Welcome to the world of Mirabelle, a young goldfinch who loves to sing and dreams of becoming a musical star. She lives with her family in the backyard of a piano teacher, and she is quickly intrigued by Mr. Starek’s newest pupil. Michael Jin is an eleven-year-old keyboard sensation, but lesson after lesson, he refuses to play.  With the prestigious Chopin Festival looming at summer’s end, how will he be ready in time?  Mirabelle is responsible for Michael’s breakthrough—to her own astonishment, she sings the Chopin piece he is beginning to play at the piano. It is their first duet.

Thus begins a secret adventure that will take Mirabelle and Michael further than they ever imagined—in music, in friendship, and in solving the mystery of a lost piano that could be worth millions.  A house full of treasures holds the clues. There, Mirabelle, Michael, and their friend Emily will make an important discovery that links the great composer Frederic Chopin, the trailblazing author George Sand, and the French Romantic painter Eugene Delacroix.

A fast-paced, history-rich mystery will have young readers hooked as they root for boy and bird in this beautifully told novel, full of emotion and suspense.

I had written a novel (Masterpiece) about a beetle who is an amazing artist, and I wanted to write another story about an animal with a special talent. I read that Mozart once had a pet starling that could sing a theme from one of his piano concertos, which made me interested in birds singing human music… which led me to my goldfinch Mirabelle, her friendship with a young piano-player, and their effort to solve the real historical mystery of Chopin’s lost piano.

Oh, it would have to be Mirabelle, the main character and narrator of Duet. She is a chatty, enthusiastic young goldfinch who loves singing and dreams of becoming a star.  She has a big voice, but an even bigger heart.

The story definitely came first, but as soon as I realized the center of it would be the musical combination of Mirabelle’s singing and Michael’s piano-playing, the title came naturally.

I’m proud of the scene of their first duet, when Mirabelle starts to sing the Chopin piece that Michael is playing at the piano and feels magically transformed by the music.  Despite my childhood piano lessons, I have no real aptitude for music—even though I love it—so it was vicariously thrilling to write a scene about two characters sharing real musical talent.

I have learned so many practical tricks in the course of my writing career—for example, in suspenseful scenes, the instinct is to speed things up, but for maximum tension, you need to slow things down. But probably the most important lesson I’ve learned from writing is that there’s no formula; each story reveals its own best structure and language and form.  As a writer, my job is to let the story lead, pay attention. and do my best work.

I love the way little Mirabelle, who is probably no more than five inches long, is a huge presence swooping across the foreground, dwarfing everything else. And I also like the way Michael is playing the piano in the background, surrounded by the house full of treasures, hinting at the mysteries of the book.

I just finished an adult essay collection, These Precious Days, by Ann Patchett. She’s a wonderful writer of just about anything, but I think she is one of the truly great essayists. This collection is funny, insightful, surprising, wise.

I’m working on a new novel based on another real historical mystery—my favorite kind!—about a book created in Renaissance Italy during the 1400s that’s written in a language nobody has ever been able to decode. My current title is The Book That Could Never Be Read.

The scene where Mirabelle tries to save Mr. Starek’s life was both difficult—she’s just a bird, after all—and emotional, because he means so much to her and she feels so powerless.  Just as in suspenseful scenes, more is more, in emotional scenes, less is more.  It can be hard to strike the right balance of full, convincing emotion that doesn’t tilt toward sentimentality or mush.

I don’t really think in terms of lessons when I write, but there are many things I hope readers will remember from Duet. . . that the joy of creating music or art is better than any external reward; that you must be willing to sacrifice for the things and people you love; and that both history and nature are full of wonders that can endlessly enrich our ordinary lives.

2 thoughts on “Author Chat with Elise Broach (Duet), Plus Giveaway! ~US Only”

You are here: Author Chat with Elise Broach (Duet), Plus Giveaway! ~US Only