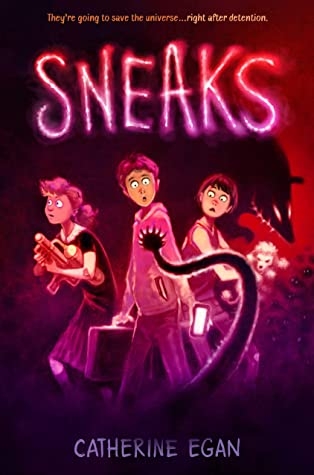 Today we are chatting with Catherine Egan, author of

Read on for more about Catherine, her book and giveaway!

Catherine Egan grew up in Vancouver, Canada. Since then, she has lived on a volcanic island in Japan (which erupted while she was there and sent her hurtling straight into the arms of her now husband), in Tokyo, Kyoto, and Beijing, on an oil rig in the middle of Bohai Bay, in New Jersey, and now in New Haven, Connecticut. She’s written several books for teens, including the Witch’s Child trilogy: Julia Vanishes, Julia Defiant, and Julia Unbound. Sneaks is her middle-grade debut.

Men in Black meets middle school! A school project takes an alien turn when three kids uncover a secret society whose aim is to keep sneaks—mischievous interdimensional sprites—from slipping into our universe!

When Ben Harp sees his teacher’s watch crawling across the hallway, he thinks he must be dreaming. But no, he’s just seen his first Sneak—an interdimensional mischief-maker that can borrow the form of any ordinary object.  He figured this school year would be bad—his best friend moved away, the class bully is circling, and he’s stuck doing a group project with two similarly friendless girls, Charlotte and Akemi. Still, he wasn’t expecting aliens! And he certainly wasn’t expecting that the woman he and Charlotte and Akemi are assigned to interview for their “living local history” project would be a Sneak expert. Or that she’d foist an old book on them to keep safe…and then disappear. Now Ben, Charlotte, and Akemi are trying to understand a book that seems to contain a coded map while being pursued by violent clothes hangers, fire-spitting squirrels, and more. The Sneaks want that book! And they want something else, too: to pull a vastly more dangerous creature into the world with them. Can three misfit kids decode the book in time to stop an alien takeover? And if they do, will they get extra credit on their group project?

Every story comes from multiple seeds, and once they’ve grown a bit, I gather them together into a bouquet. Sneaks began with two primary sources of inspiration / story-seeds:

The rest of the story grew in between that opening scene of the watch crawling around, and the puzzle-house where the final chapters take place.

I loved writing Spatula, the highly-evolved Sneak trapped in Gael House. There’s something so appealing about necessary alliances with semi-evil characters. His cleverness, snark, and self-interest made him a lot of fun in a book where everybody else is very invested in their “side.”

Without being too spoilery, I’m proud of the climactic scenes inside Gael House, in particular a high-stakes dash along a tunnel coated with baby Sneaklings and a view of the gap between universes. Keeping the action tight and creating this otherworldly setting was a really satisfying challenge.

I love everything about it but most of all I loved seeing my characters brought to life. They are so perfect. Kevin Cornell read the book and added in little plot details like the band-aid on Charlotte’s elbow, Akemi in her basketball jersey, Ben with his phone, the Book of Keys, and the all-important briefcase. But possibly my favorite thing of all is the expression on the poodle Poubelle’s face!

I am absolutely going to cheat and name more than one book, but to keep it from being an endless list, I will stick to three middle-grade novels:

I am so excited about Dhonielle Clayton’s The Marvellers. She is a master world-builder, and this looks like a thrilling new take on the idea of magic schools.

I am a long-time admirer of Mahtab Narsimhan. I am also a lover of rats (as anyone who reads Sneaks will be able to guess) although I’m not sure the rats in her upcoming Valley of the Rats will be friendly!

My kids and I have been eagerly awaiting the fourth book in the Morrigan Crow series by Jessica Townsend. It isn’t coming out until next fall, but it has a title now: Silverborn.

Actually, sorry, I have to cheat a little more and name one YA novel too, because I adore everything that Rachel Hartman writes—Tess of the Road shook me to my core—and I can’t wait for Tess’s story to continue in the upcoming sequel In The Serpent’s Wake.

I’m in the middle of reading Burn by Patrick Ness with my kids and we are all totally absorbed in the story, loving his writing and his take on dragon lore. I never get tired of dragons.

I tend to read more novels than short fiction, but I was delighted by all of the stories in This Is Our Rainbow, edited by Katherine Locke and Nicole Melleby. What an incredible roster of writers. A really beautiful, fun, and affirming collection for young people.

Charlotte. I wanted her to be a bit of a cipher, but didn’t want to risk her coming across as shallow or unsympathetic, either. There was so much going on with her that I had to hint at without revealing too much too early.

I wasn’t thinking about this as I was writing—it was only clear to me after I’d finished the book that it was very much about people really seeing (or not seeing!) each other. In the same way that you have to look carefully to recognize a Sneak, as they might escape a casual glance, a second, more careful look at almost anyone will reveal much more than our first impressions. At its heart, I think the book is about the consequences of not seeing each other, and about learning to look harder and be more open to connection.

IRIS (Integrated Refugee & Immigrant Services) is a reliable local organization that does really remarkable work in my community and beyond. They are currently helping many Afghan refugees resettle in the area, and they need all the support they can get.

Write the next thing and learn to let go. You might think, in the middle of writing a book, that you’re never going to care about another book as much as this one. But you will. Finish it, let go, move on, don’t look back. There will be highs and lows, but the lows are much easier to ride out if you keep that forward momentum.

4 thoughts on “Author Chat with Catherine Egan (Sneaks), Plus Giveaway! ~ US Only”

You are here: Author Chat with Catherine Egan (Sneaks), Plus Giveaway! ~ US Only