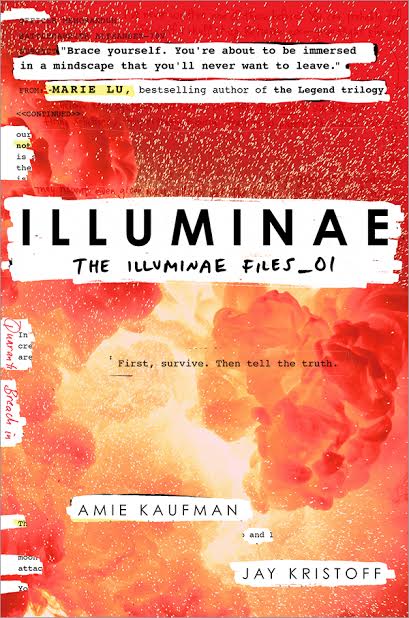 Greetings, YABC! Today we are pleased to welcome Amie Kaufman and Jay Kristoff, authors of Illuminae (The Illuminae Files_01). Their book presents a unique YA science fiction experience through an eclectic collection of literary mediums. Amie and Jay were kind enough to answer a few questions about their new release! –Angela N. Blount 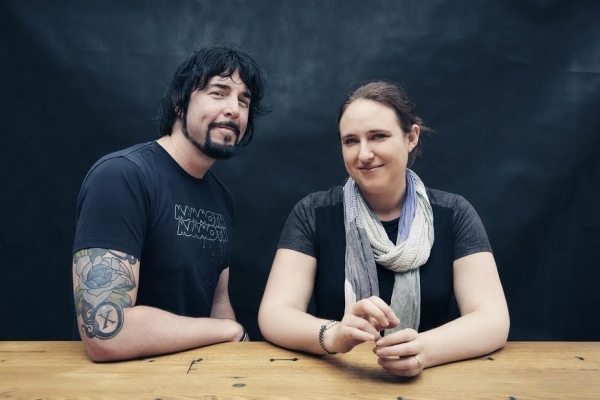 AMIE KAUFMAN is the New York Times–bestselling co‐author of the Starbound Trilogy. JAY KRISTOFF is the award‐winning author of the Lotus War Trilogy. Collectively, they are 12’5″ tall and live in Melbourne, Australia, with two long‐suffering spouses, two rescue dogs, and a plentiful supply of caffeine. They met thanks to international taxation law, and stuck together due to a shared love of blowing things up and breaking hearts. You can learn more about Amie at amiekaufman.com and Twitter @amiekaufman, and Jay at jaykristoff.com and Twitter @misterkristoff.

This morning, Kady thought breaking up with Ezra was the hardest thing she’d have to do.

This afternoon, her planet was invaded.

The year is 2575, and two rival megacorporations are at war over a planet that’s little more than an ice‐covered speck at the edge of the universe. Too bad nobody thought to warn the people living on it. With enemy fire raining down on them, Kady and Ezra—who are barely even talking to each other—are forced to fight their way onto one of the evacuating fleet, with an enemy warship in hot pursuit.

But pursuit by battleship is the least of their worries. Their fleet’s artificial intelligence—which should be protecting them—may actually be their enemy. And a plague is slowly ravaging the fleet with terrifying consequences. As Kady plunges into a web of data hacking in search of the truth, she realizes that there’s only one boy who can help her bring everything to light . . . and of course, it’s her ex‐boyfriend, Ezra.

Told through a fascinating dossier of hacked documents—including emails, schematics, military files, IMs, medical reports, interviews, and more—ILLUMINAE is a ground‐breaking, edge‐of‐your‐seat thrill ride that will draw teen and adult readers of James Dashner, Rick Yancey, and Veronica Roth yet stands on its own by virtue of with Kaufman and Kristoff’s unique storytelling. 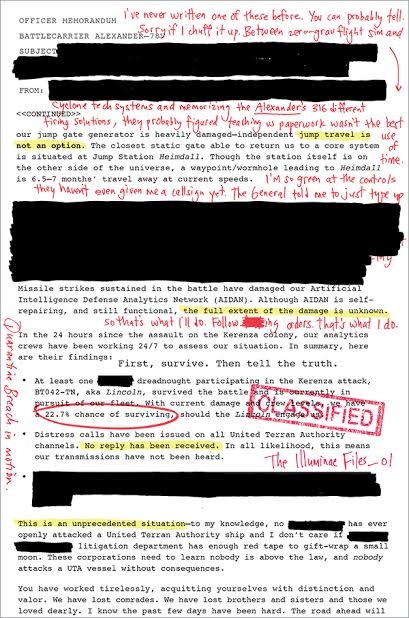 Angela Blount: Collaborative writing can be a challenging process. Could you tell readers a little about how you were able to assemble this project together, and what aspects you found your individual strengths contributed to?

Amie Kaufman and Jay Kristoff: Typically, we begin with a concept session at the pub. Jay drinks, Amie watches him drink, and about 4 drinks in, the magic starts to happen. We’ll only plot around 100 pages in advance, as new thoughts and twists tend to occur to us as we write. Then we break that 100 pages into scenes, and decide what format each scene should be (IM, email, interpretive dance routine, etc).

After that, scenes are broken down into POVs, and we divide writing duties up based on the character writing them. Amie writes Kady’s PoV, Jay writes Ezra and AIDAN. When it comes to IMs, we get an idea of the scene’s “job” (ie “Kady and Ezra have a fight here”), start up a gchat window and then ad lib the rest of the conversation. It’s a lot of fun. Doesn’t hurt that we were both huge RPG nerds in our youth.

It really does come down to choosing a partner whose abilities compliment your own. Jay likes to write the big flashy scenes, and often goes to pretty dark places. Amie is great at finding power in quiet moments and introspection, and of course the kissy stuff. Although do not be fooled by her sweet exterior – she’s totally capable of bringing the carnage, too.

AB: Your joint author bio states that you two met thanks to “international taxation law.” Would one or both of you care to elaborate on that? 

AK & JK: Okay, so if you’re a foreign national (also referred to as “an alien”) earning money in the United States, you need an International Tax Identification Number (ITIN). But anyone who’s dealt with the IRS knows how difficult it can be, especially if you’re living half way across the world. The process can be politely described as “nightmarish”, but it’d be more accurate to say “omgwtfasdfasdfasdfasdfasdfasdfasdfasdfasdgaaaaaAAAAAAAAAAAAAAAAAAA”

Jay, though a mix of mad ninja skillz and dumb luck managed to get an ITIN on his third try. Amie was in the process of trying to get hers, and mutual friend ­ who knew Jay had just lived through the ordeal ­ decided to introduce us. Amie offered to buy Jay brunch if he’d teach her his secret ninja handshake, and the rest is history.

AB: Illuminae has a straightforward timeline set 560 years in the future. Was there a particular reason you two chose this span of time?

AK & JK: In the ILLUMINAE series, humanity travels interstellar distances through wormhole technology, and has also developed complex artificial intelligences capable of independent thought. Speaking to an astrophysicist friend of ours, and also a computer hacker friend (who can’t be named for legal reasons) we decided 500 years would be the minimum amount of time required for humanity to begin to comprehend wormholes and develop the required level of technology to effectively utilize them as a means of travel.

Of course, this is all speculation. We don’t actually know if wormholes can be used to traverse interstellar distances – that’s really only a theory at this point. But getting to play with fringe theory and get paid for it is one of the awesome things about being a SciFi writer.

AB: What sci­-fi influences would you each credit as especially impactful on your creative development?

Those are a few. Seriously though, we could go all day – we were both massive SciFi nerds growing up, and remain so to this day.

Speaking of, OMG CAN WE TAKE A MOMENT TO SQUEE ABOUT A NEW STAR TREK TV SERIES STARTING IN 2017?!?

AB: It’s clear that Illuminae is the start of a larger overarching story. How many books can readers expect to see in this series?

AK & JK: THE ILLUMINAE FILES will be a trilogy. Chronologically, Book 2 will pick up right after Book 1 finishes. We wish we could talk more about it, but we very quickly get into massive spoiler territory, and Book 1 has only been out a couple of weeks!

We’ll definitely be bringing more news about the next book in the series soon – we’re SUPER excited about it!

AB: Could you share with us what future projects you both may have planned outside of The Illuminae Files, be they joint or solo ventures?

AK & JK: Jay is launching a new fantasy series next year, called NEVERNIGHT. It’s about a young girl training in a school of the world’s deadliest assassins, and has been described as “Harry Potter meets the Lies of Locke Lamora”. The first book is out in June 2016.

Amie’s Starbound Trilogy (co­authored with Meagan Spooner) wraps up with THEIR FRACTURED LIGHT in December. The pair’s new SciFi series, pitched as “Indiana Jones meets Lara Croft in spaaaaace” begins with UNEARTHED in 2017. Amie is also putting out a MG series called ELEMENTALS in 2018.

As for new projects between Amie and Jay, we’re tossing around ideas as we speak. But you still have two more years of ILLUMINAE FILES to look forward to in the meantime!

A big thank you to Amie Kaufman, Jay Kristoff, and Angela Blount for this enlightening interview! Now read on for the latest giveaway below! 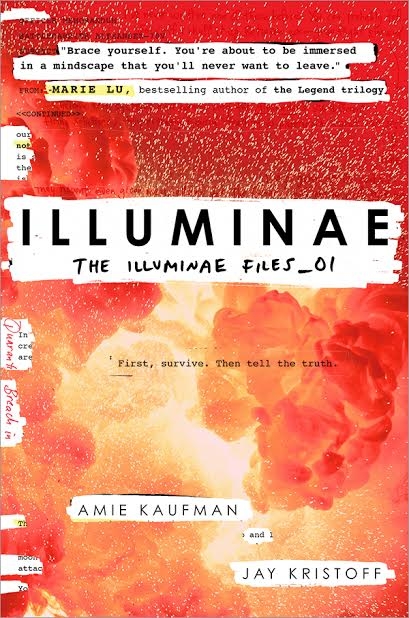 Two winners will receive a copy of Illuminae, US and Canada only.

Entering is simple, just fill out the entry form below. During this giveaway,

3 thoughts on “Author Chat with Amie Kaufman and Jay Kristoff”

The Drowned Woods
Zyla and Kai
A Duel with the Vampire Lord (Married to Magic, #3)
Meet the Moon
The Second Death of Edie and Violet Bond
The Honeys
Big stuff planes, rockets, spacecraft!
Put a Lyd On It! (Wrassle Castle #3)
Dressing Up the Stars: The Story of Movie Costume Designer Edith Head
Ask the Girl
Dinos Driving
A Synagogue Just Like Home
Bear Has a Belly (Big, Little Concepts, 5)
Biscuit and the Great Fall Day (My First I Can Read)
Listen Up! Train Song (Big, Little Concepts, 2)
The Long Ride Home
Big Lies: from Socrates to Social Media
Raising Don: The True Story of a Spunky Baby Tapir
Sloth's Treehouse Inn
Koala Crossing
Frank and Bean: Food Truck Fiasco
How You Grow Wings
Coming Up Cuban: Rising Past Castro’s Shadow
Booked Graphic Novel (The Crossover Series)
Haven: A Small Cat's Big Adventure
Empty Smiles (Small Spaces #4)
The Secret Letters (Mysteries of Trash and Treasure, 1)
On the Trail (Peanut, Butter, and Crackers #3)
Elmer and the Talent Show
Millie, Daisy, and the Scary Storm

You are here: Author Chat with Amie Kaufman and Jay Kristoff