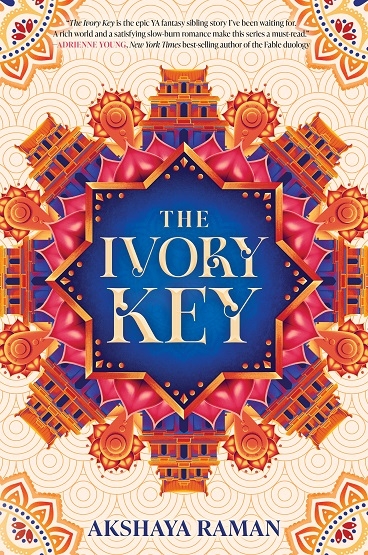 Today we are chatting with Akshaya Raman, author of

Read on for more about Akshaya and her book!

Akshaya Raman fell in love with writing when she wrote her first story at the age of ten. Though she graduated from UC Davis with a degree in biology, she gave up pursuing a career in science to write books. She is a co-founder and contributor to Writer’s Block Party, a group blog about writing and publishing, and has served on the planning teams of several book festivals. She lives in the Bay Area with an actual scaredy cat, and in her free time, she enjoys baking, traveling, and watching too much reality TV. You can find her on Instagram and Twitter.

Magic, a prized resource, is the only thing between peace and war. When magic runs out, four estranged royal siblings must find a new source before their country is swallowed by invading forces. The first in an Indian-inspired duology.

Vira is desperate to get out of her mother’s shadow and establish her legacy as a revered queen of Ashoka. But with the country’s only quarry running out of magic–a precious resource that has kept Ashoka safe from conflict–she can barely protect her citizens from the looming threat of war. And if her enemies discover this, they’ll stop at nothing to seize the last of the magic.

Vira’s only hope is to find a mysterious object of legend: the Ivory Key, rumored to unlock a new source of magic. But in order to infiltrate enemy territory and retrieve it, she must reunite with her siblings, torn apart by the different paths their lives have taken. Each of them has something to gain from finding the Ivory Key–and even more to lose if they fail. Ronak plans to sell it to the highest bidder in exchange for escape from his impending political marriage. Kaleb, falsely accused of assassinating the former maharani needs it to clear his name. And Riya, a runaway who cut all family ties, wants the Key to prove her loyalty to the rebels who want to strip the nobility of its power.

They must work together to survive the treacherous journey. But with each sibling harboring secrets and their own agendas, the very thing that brought them together could tear apart their family–and their world–for good.

THE IVORY KEY was inspired by many of the adventure stories I loved as a child, but two big sources of inspiration were the complicated family dynamics of The Originals and the clever puzzles and ancient mysteries in movies like Indiana Jones and National Treasure. But the idea really began with how I conceptualized the magic system in this world. I wanted to write about magic that anyone could learn to use–magic that was a skill, channeled through hard work and creativity. The story evolved from there as I thought about the ways in which magic being a physical resource could be a source of conflict in this world.

I don’t know if I can pick a favorite! I put elements of myself into all four of them and I had a lot of fun getting to exploring how different each of them was from the others and how that fed into the sibling conflict.

YABC: Which came first, the title or the novel?
Definitely the novel. I’m terrible at titles and though I had a lot of working titles for this book, it was actually my agent who suggested THE IVORY KEY during one of the revision rounds we did together!

The action scenes toward the end of the book. I’m not naturally good at writing things that involve a lot of blocking and movement especially if it also involves physical conflict. It took a lot of effort to nail those scenes and I really am proud of how they turned out!

Get to the end. I wish I’d understood that finishing something is more valuable than trying to get a story perfect the first time. I can fix it—but only once I know what I’m working with and what I’m trying to accomplish.

Is it cheating to say everything? Honestly I feel so lucky to have such a beautiful cover that I’m obsessed with! When my editor reached out about what I would want on the cover, my only request was for architecture. I specifically wanted a South Indian style temple with a gopuram tower and I absolutely LOVE what the design team at Clarion Books (special shoutout to designer Dana Li and artist Doaly) came up with. I also love the bright colors which I think suit the more lighthearted adventure tone of the book really well, and the lotus petals which refer to the Kamala Society, a dangerous secret society in the book.

I can’t wait for THE GIRL WHO FELL BENEATH THE SEA by Axie Oh and INTO THE MIDNIGHT VOID by Mara Fitzgerald.

I’m currently working on the sequel to THE IVORY KEY. I can’t share too much yet, but it definitely has more action than book one. There are also more secrets, more treasure hunts, more romance, and some surprising twists and turns along the way!

The hardest scenes were the ones where Riya reconnects with each of her siblings. It was challenging because while it’s the first time those two characters interact on the page, it’s not a first meeting. They grew up together so they’re bringing their past history and baggage to that conversation and it took a little bit of time for me to figure out the best way to handle those moments.

The hardest to write was definitely Ronak! For several entire drafts, his storyline was totally different and it took me a really long time to figure out what to do with him.

I wanted to write a story in which characters aren’t bound by fate and instead choose to pursue their dreams. Each of the characters has their own reasons for tracking down the Ivory Key, but the thing that unites them is their determination, tenacity, and hope. I hope readers are able to connect with that and remember that we get to choose our own destinies.

When I’m reading a book I tune literally everything out. I can get so hyperfocused that I won’t notice a single thing happening in my surroundings.

YABC:     Is there an organization or cause that is close to your heart?
A cause that’s important to me is increasing mental health awareness in South Asian communities. There’s still a lot of stigma associated with therapy and I would love to see that change.

First, there’s no wrong way to write a book. You don’t have to write every day or have a fancy writing ritual or a detailed outline (unless any of those things are helpful for you!) as long as you’re getting words written and telling the store you want to. Second, find your community. Writing can often be a very solitary thing, and having fellow writers to commiserate, celebrate, and connect with makes all the difference.

Thank you for having me! This book is really close to my heart and I can’t wait to share it with readers!

You are here: Author Chat with Akshaya Raman(The Ivory Key)!